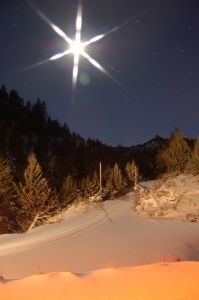 I’m not sure at what exact age it happened, but at some point my Christmas wish list changed from things that fit under the Christmas tree to less tangible things that don’t come in boxes.

I wish for healing for friends and family members who are suffering, either physically or emotionally. I wish for peace among family members and in the world at large. I wish for wisdom in parenting my children. I wish for belief when I am burdened with doubt. The list goes on. Perhaps you have one of your own?

Unlike my children, who are eagerly awaiting (early!) Christmas morning to open their presents, I know that most likely my wish list won’t magically be fulfilled simply because the calendar states it is December 25th. Yet, still, I hope. I do believe in miracles. I’ve seen them happen.

Isn’t that what Christmas is about? Hoping in the face of unbeatable odds? Think of the Jewish people who waited and waited for a Messiah. At times, it must have seemed that the Savior would never come. And when He did come? He came in a way they never expected – as a poor baby born in a stable.

He would go on to counter all of their expectations. They expected a military leader, someone to conquer the world for them. What they got was a carpenter who would preach the need for love and forgiveness and who would ultimately die on a cross as a criminal. How could they continue to hope in the face of all that? Wasn’t it all just some cruel joke? Many stopped hoping. Who could blame them?

Yet, for the select few that held on to their hope, their faith was richly rewarded. It was the ultimate surprise ending. The unthinkable happened. Death was conquered!

We celebrate Christmas because of Easter. For those of us who have heard both the Christmas and Easter stories over and over again, they may have lost some of their shock value. This Christmas, try to listen to the Gospel with fresh ears. The Savior of us all, the Son of God, came to earth as a baby in the humblest of circumstances. Angels announced his birth. Both shepherds and kings bowed before him.

Christmas is a miracle of the greatest degree. God still works miracles today. Believe that they can happen. I hope and pray that your Christmas wishes come true.