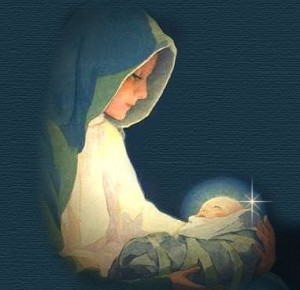 The first Christmas memory that comes to mind is from my childhood, and it includes a large tree and special presents. My brother and I were up early, whispering as we poked and prodded the gifts.

But that’s not my favorite. Not anymore.

Eight or nine years ago I attended my first midnight Christmas Mass. I was with my boyfriend, a guy who seemed too good to be true.

I had been attending Mass with them for some time, but nothing prepared me for that Christmas Mass. I had smelled incense, heard choirs, participated in the liturgy before. I wasn’t exactly an old pro, but I was learning.

In those days, my bedtime was far later than it is now, and so it wasn’t even hard to stay up until midnight to attend.

To see our small church crowded -- standing room only -- in the middle of the night; to hear the choir pealing out hymns in a way they never did on Sundays; to see the extra candles, the extra servers, the extra decorations -- all of this burned it into my memory.

All of a sudden, my years of hating Christmas seemed to melt away. Because what I hated wasn’t really Christmas. I began to realize that Christmas isn’t the shopping and the juggling and the family politics.

Christmas is a birth.

I’m a mother now, and I look back on that first Christmas Mass -- celebrated in the middle of a cold winter night -- with continuing appreciation.

The magic of Christmas happens, for me, in the Eucharist, in the Baby whose birth continues to change my life and make me better. I feel the wonder of life around me, amid the music and the incense and the dark night. I remember giving birth and I remember being a child, believing that Christmas was special.

And now, thanks to a memory that I try to relive every year, I have found the true magic of Christmas.