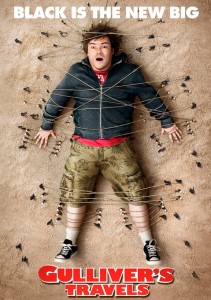 Last week, I broke my own rule and went to see a movie without first consulting the USCCB's movie review website. The "film" in question was the new Jack Black version of Gulliver's Travels and the company was my sister-in-law, mother-in-law and second grade nephew. Since I was just along for the ride and wanted to spend more time with my nephew, I opted not to see True Grit with my husband and brother-in-law and instead opted for the PG version of the classic film.

While seated in the theater, out of curiosity I looked up the review on my iPhone and was shocked to find the film had been rated "O" by the Bishops' reviewers. Normally, I completely avoid all "O" films, but since I had already paid and since the film was rated PG, I decided to stay and see what merited the "Morally Offensive" categorization. By comparison, the PG13 film True Grit earned an AIII - Adults Only.

In the USCCB review, the hint at the "O" context comes in the lines:

Although Darcy catches up with Gulliver's plagiarism, the deeply flawed moral takeaway remains intact: Theft and falsehood can be a path to achieving your dreams. That's a harmful lesson for children and an unwelcome message for adults.

I won't give the film's ending away, but I will say that I thought Black's Gulliver did have a moment of reconciliation in the film, an awareness of his wrongdoings, and a decision to make amends. If I found anything offensive, it was the "potty" humor (which was probably even more gross in the 3D version), which was -- of course -- what garnered some of the largest laughs.

If you've seen Gulliver's Travels, I'd love to hear if you feel that the film was indeed Morally Offensive. I would not recommend taking youngsters to the film, mostly because it's just not really very good. With so few "G" rated options and now even PG films being given the "thumbs down", it looks like I would have been better off taking my nephew to the zoo!

Have you seen this version or the classic? What's your take?