Boys Will Be Boys 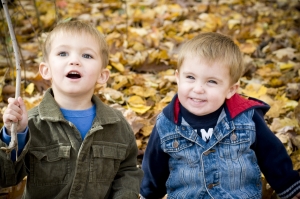 I have a hypothesis that much of the disharmony in today’s family units is  the result of a failed social experiment.  Society pushed for equality between the sexes. Experts told us we could do it.  Politicians pushed for it at every corner.  In the business world, stride were made.  But in families, well, things have not gone so well.  It seems that some things you just cannot legislate.  One of those things is that boys will be boys and girls will be girls.

In the early sixties, when I grew up, we wanted our girls and our boys just the way they came to us. Curls and ruffled slips, patent-leather buckle shoes and lots of pink, pink, pink.  In spite of a possible inclination to  climb trees, catch frogs and jump off swings, most girl were still girls at the core.  Baby dolls and playing house were more fun than trucks and cap guns, while ribbons and dresses beat out sneakers and jeans.

Unisex did not exist pre-Sixties because it made no sense to that generation--that is until we grew out of our pink dresses and buckle shoes.  The baby boomers upset the status quo and challenged conventional thinking.  Girls were only pink and frilly because parents put them into feminine strait jackets.  “Dads, if you would rough house and toss your daughters around like you do your sons, they’d be a hardier, stronger group,” the psycho -gurus claimed.  “And mothers, while you are burning your bras in the sexual revolution, toss in those patent leather shoes and pink dresses.”

Overalls and unisex colors began covering the diaper set as they emerged from the age of Aquarius.  In the later seventies, while a college student, my peers and I agreed:  Raise your daughters more like your sons and the sexes will be more alike--more equal.  It was the dawning of a new age.  Girls would no longer be treated like the weaker, frillier sex and men would no longer be he-man Neanderthal-types.

Where has the Unisex Clothing Gone?

Now, let’s fast-forward to the twenty-first century. What does your family look like?  Have we broken the sterotypical sex mold?  Yea right.  Just step into a department store and check out the unisex clothing.  There isn’t any.  There is a boys’ department and a girls’ department and there is no mistaking which one you are in.  And, I venture to say, there has never been more lace, ribbons, patent leather or pink in little girl’s clothing since the dawn of civilization.

So, what  happened to our social experiment?  As the mother of ten children--eight boys and two girls--I can tell you what happened:  The experts of the era were wrong, but Madison Avenue was right via the popular margarine commercial which once correctly stated, “You can’t fool mother nature.”

From the time my little tykes could crawl and hold a plaything, the boys were conquerers and the girls nuturers. My boys had a nuturing side, and still do but the caveman warrior was there from the start.  When a new baby appeared on the scene, my boys were just as quick to want to push the stroller as the girls.  But in the hands of boys a stroller becomes a race horse or crash car.  In the hands of a girl it is a cradle on wheels.  Girls mother their baby dolls and stuffed animals.  They bathe, dress and feed them, and always want to cut their hair.  These sorts of activities never occur to boys.  Dressing a toy would involve work just like dressing themselves; it is something to merely get over with.

Speaking of dressing, if you bring new clothes home to a boy and ask him to try them on, you might as well have asked him to  pluck all his hair out.  Both hold equal appeal.   But bring home new clothes for a daughter, and she will beg you to let her try them on.  If you want to torture her, hang the clothes in her closet and forbid her to try them on.

We Are Our Chromosomes

Boys and girls approach the world in very different ways. Just consider what would happen if you fill two rooms, one with little boys and one with little girls.  Now, introduce a big hairy tarantula into the center of the room.  In the boy’s room, the tarantula will be a magnetic force, drawing the boys in and evoking macho comments such as:  “Oh, cool!  Can I hold him?  Let’s see what happens if we turn him upside down.”

While in the girls’ room you would hear shrill screaming and see the blur of bodies knocking each other over to get out the door.  Okay, there are some exceptions.  I liked critters as a girl, but we cannot deny the above scenes would be generally true.

And have you noticed that boys like big things while girls prefer small things.  Boys want BIG monster trucks and big boots.  They want to grow up BIG like their daddies.  Girls play with Polly Pockets and other minitures.

Several years ago I was helpling out with a kids activity group.  The moms took turns coaching and refereeing outdoor games such as kick ball.  One afternoon an exhauasted mom plopped down into a group of other visiting moms.  (Moms visit, dads talk sports, business or tell jokes.)

“Boys are so much easier,” the mom lamented.  “The girls have to argue every little detail and debate who is doing what, while the boys just want to play.”

I laughed.  “But these simple, nonverbal boys who are easier to coach than girls, grow up and drive their wives crazy because of their unwillingness or inablility to communicate.”

So by observing the natural inclinations of our children we can see that in general, boys will be boys and girls will be girls. If you give a girl a truck, she will give her teddy bear rides in it.  If you give a boy a doll, it will never get its clothes changed and it might one day attack all the stuffed animals on the bed--just for fun.  You can teach your son to nurture, but if you put him in with a group of boys, things are going to get loud and wild.  You can raise your daughter in green and orange overalls, but just walk into a department store and you will lose her in one of the pink aisles.

What all this means is that many in my generation convinced themselves that men and women were going to be remade into a new image. Suddenly, wives began complaining when their husbands did not care for the kids the same way they did. Previously no one had expected it. But men did not become just like us because it was not possible.  They do not always get it because they were never little girls.  While we were taking care of the physical needs of our dolls and stuffed animals, those boys did not even notice their toys needed baths.  While we girls talked and discussed how the games should be played, the boys just played--no thoughts, no discussion, nothing. Go figure.

Many supposed liberated women ended up marrying supposed nurturing guys of the eighties and nineties, but what they often got were grown-up versions of the boys.  Before the big sexual revolution, wives were expected to fulfill the same duties they had practiced since girlhood.  After the revolution, wives more often expected them to share in a role the boys had never practiced for.  The women were ready for this “new and improved” man but most the men were not so new and improved. They just grew up with their natural male inclinations and married women who had different expectations.

Of course I am oversimplifying relationships and some of what is behind the growing the divorce rate. But perhaps a part of it is that our culture idealized the perfect, sharing, equal marriage partnership.

So that leaves us with two options.  Either we try harder at over-riding  the X and Y chromosome engineering, or we face the fact that men and women bring different traits to a relationship.  Based on what I have observed thus far, I suggest we not overlook our chromosomes.