An Interview with An Exorcist: Fr. Gary Thomas 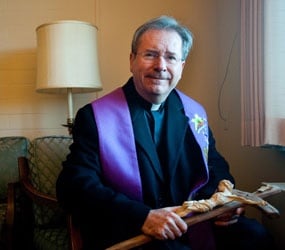 Editor's Note: As part of our coverage of the opening of The Rite, I'm pleased to share the following interview of Fr. Gary Thomas whose story inspired the film.  We thank Leticia Velasquez for sharing this conversation with Fr. Gary Thomas and point you also to a review of the film by Patti Maguire Armstrong.  LMH

Interview with Fr Gary Thomas, the priest on whose experience the film “The Rite” was based.

Velasquez: I’d like to ask my first few questions about the book.

What did you first believe about Satan? How long had you been a priest and what was your belief?

Fr Gary: I was a priest for 27 years; I never doubted the existence of Satan. However, I don’t think I’d ever seen Satan until I became an exorcist. Like they say in the Creed. “All that is seen and unseen”. I had no reason to doubt Satan.

Velasquez: No doubt in your years as a priest you’ve seen his work, you just didn’t meet him. After you took the course in exorcism at the Regina Apostolorum, you had more of a change of experience than a change of belief then?

Fr Gary: Oh, I’d say so, absolutely, sure, because my belief in Satan and the existence of Satan, I just assumed there was a Satan, because the Church teaches about Satan and I thought it was true. Taking the course was very informative, but it wasn’t to much taking the course as being able to apprentice under an exorcist in Rome for three months, that was far more profound.

Velasquez: So that left you convinced that this was an important ministry within the Church?

Velasquez: What made you coordinate with Matt Baglio on the book?

Fr. Gary: Well, Matt was just taking the course in Rome like I was; I didn’t know him till we were in the course together. He was an American and we were the only two Americans in the class.

Velasquez: Were you helping each other with Italian?

Fr Gary: I wasn’t helping him with his Italian, because he’s very good with Italian, he’s married to an Italian. He was helping me with my Italian. He was so kind to translate the presentations for me. He would translate the presentations for me because the Regina Apostolorum didn’t always offer translator, however, I didn’t know that till I got there.

Matt and I would talk a lot, when I told him I was going to be there for a long time and I was looking to find an exorcist, and he asked me “would mind if I wrote a book about your experiences of your training?” I just kind of shrugged my shoulders and said, “OK, That’s fine if you want to.” I had no idea where this was going to lead, but I knew he was a journalist by profession. He spent hours interviewing me, especially when I was working with a priest in Rome.

Velasquez: And that Roman Capuchin exorcist is portrayed by Anthony Hopkins in the film as Fr Lucas?

Fr Gary: Yes. My character is played by Colin O’Donohue.

Velasquez: And he’s a seminarian rather than an experienced priest?

Fr Gary: That’s correct. The filmmaker did take a bit of license with that.

Velasquez: Did he play an Irish priest? He’s Irish, right?

Fr Gary: He is, but in the movie, you will not hear his brogue. He’s playing the role of a deacon, he’s been ordained already. He’s had a faith crisis, and he’s been having a faith crisis during every summer of his seminary formation, he realizes this after he is ordained a deacon. I think he just realizes that he’s made a mistake.

Velasquez: Do you think that the differences in the portrayal of the story affect the message?

Fr Gary: No, I don’t think so. I mean I watched the movie with Anthony Hopkins two weeks ago, I thought it was very riveting. It was very emotional for me, yes, they took some license, but the core message in that movie, and I think this is a movie about faith.

Velasquez: Its good to hear that because the book was very moving.

Fr Gary: The book is all true. There’s nothing in that book that’s not true.

Velasquez: So you think the movie is realistic. Unfortunately, the trailers are a bit sensationalistic.

Fr Gary: I know, the trailers don’t do the movie justice. I’ve had lots of my parishioners say, “Oh my Gosh, they look so scary”, but I tell them it’s not as scary as it looks.

Velasquez: Perhaps they chose the scary parts to attract an audience which might not be initially interested in the deeper message. I hope they do come and it works to get them in to see the film. What is the takeaway message of the film?

Fr Gary: I think the takeaway message is that its very important to have a faith life. And if you have that faith life, it will only lead to good. That evil does exist in the world and its bigger than just the force of a power. Its an intelligence. And in the same breath, Christ has come to be with us and get us through this life to the next.

Velasquez: Matt Baglio gave me the impression that you two were very devoted to spreading this message in the American Church.

Velasquez: You sent copies to all the bishops.

Fr Gary: When Doubleday published the book, the religion editor called me and said, “Do you have any suggestions for us?” I said, “Yes, send this book to every bishop in the United States, and every rector of every major seminary”.

Velasquez: What kind of reaction did you get from the bishops and rectors?

Fr Gary: I got some very nice thank you notes and some letters acknowledging that they got the book, I know the religion editor got probably more than I did, but I got about a dozen. They were all very positive. Now I will tell you in the same breath, that there are bishops who don’t believe. I’ve had rector generals tell me they don’t believe.

Velasquez: What percentage of diocese have exorcists?

Fr Gary: There are 185 dioceses in the country I know there are at least 25 public exorcists, I know there’s a few more. I’d say there’s probably under 50. So probably maybe a quarter of US dioceses have one.

Velasquez: Yet, isn’t that something the Church recommends for every diocese?

Fr Gary: The Church mandates it in the Code of Canon Law.

Velasquez: So we’re actually in violation of the Code. There was a meeting about exorcism before the USCCB general meeting in November. Do you think that sending the bishops a copy of “The Rite” had anything to do with it?

Fr Gary: I wouldn’t say in a profound way, but I would say Bishop Paprocki who is the head of the Canonical Affairs Committee of the USCCB, he had been to one of our conferences. We have a conference every year back in Chicago and its for exorcists and priests involved in the healing ministry and some lay people come too. He went to one of them. I don’t know if he got a copy of the book, although he should have, it came out in 2009 and he was already an ordinary. But he said he doesn’t remember receiving it. But he has since read it. I can’t say it didn’t have anything to do with it. I think the very fact that I wrote a cover letter to 185 bishops may have had an effect.  I hope it did.  But I do think that calling a conference and calling the bishops together should have been a wake up call for a lot of them. There were 65 bishops who signed up for that conference and 55 priests. I thought it was a very well done presentation myself.

Velasquez: Have you read his book, “Exorcism and the Church Militant”?

Velasquez: Is it consonant with your experience?

Velasquez: Do you have any stories to tell of exorcisms?

Fr Gary: There was a situation in Rome once with a young woman who walked in speaking Italian to me, my exorcist trainer walked in and blessed her with holy water and she literally began screaming and picked up the chair, and was going to throw it at him. Now, they’re not all like that.

There’s the man I pray over and have been exorcising for two years, there’s huge manifestations, he’s improved dramatically, but, nonetheless, he opened himself up for a bunch of reasons. I can’t detail them on the phone, it would take too long.

Velasquez: In general, what do you recommend people avoid if they don’t want to become involved with demonic activity?

Fr Gary: I think they should just stay away from everything that is pagan in the sense of ritual, so I recommend that people should stay away from dabbling in the occult; from dabbling in things that are idolatrous, from getting involved in things that are simply about self, and I don’t mean by that going to a club and doing physical exercise. Where people are into Wicca, earth worship of other kinds, witchcraft and spells, crystals, using metaphysical means to try and find answers to questions.

Velasquez: So stay away from New Age practices?

Fr Gary: Yes, those are all the New Age practices.

Velasquez:  I appreciate your influence upon the USCCB.

Fr Gary: I hope it has some enduring influence.

Velasquez: Is there any evidence that they are sending any more priests in for exorcism training?

Fr Gary: Well, we don’t have any training programs. I hope that is something which comes from the meeting in Baltimore, we have no training programs.  I was lucky to get the training I got in Rome, but as I said to the bishops, you can’t expect the exorcists in Rome to train all our exorcists. I have already oriented two guys in the last year; They’ve spent a few days with me. But it requires much more than that.

Velasquez: Do you think there’s a greater need now in the Church than in previous times?

Fr Gary: I do, because there’s more Catholics involved in more paganism and idolatry.

Velasquez: Fr Gabriel Amorth agrees with you, according to his books. Why do you think that there’s not enough of this ministry?

Fr Gary: I think for a long time we just relied so much on the social sciences, Psychiatry and Psychology as sort of a new religion to figure out the mysteries of human behavior. I think we felt we could just depend on science, and I certainly am a proponent of using Psychiatry and Psychology, but in the same breath, I think that there’s a limit to science and there’s the realm of the spiritual we know far less about. And because of our scientific mind and orientation as a Western society, I think we put these other kinds of things we can’t figure out on the shelf.

Velasquez: So its our prejudice against a spiritual explanation for things?

Fr Gary: I think so.