Mary, Our Mother of the Bible 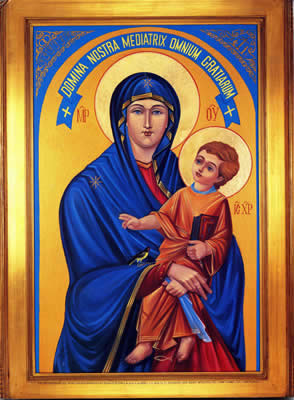 As a born-again Catholic, or as some like to call it, a “revert,” something new upon “coming home” that had not been a part of my life previously, was a devotion to Mary.  Actually, I believe it was Mary who brought me home, like so many mothers do for their lost children.

Having mixed with a fair share of anti-Catholics or even Catholics with a modern bent that does not include Our Blessed Mother, I’ve come to realize that a misunderstanding of Mary’s role in our lives leads people to fear and avoid her.  Some even think that praying to her is idolatry.  But it’s crazy to stay away from a mother who has our best interest at heart and always desires to bring us to her son. Jesus loved his Mother so for that reason alone we should love her too.  But it gets even better than that.

Jesus chose Mary for His mother from all eternity as part of God’s plan for our salvation.  God could have sent His Son any way He chose.  He chose to go through Mary to come to us.  If Mary is good enough for God to go through to get closer to us, then she is good enough for us to go through to get closer to Him.  When we honor her, we do as Jesus did when He followed the fourth commandment and honored His mother.  If God is our Father and Jesus is our Brother, then only Mary could complete the family as our Mother.

But as great as a role that she played in our salvation, the question I often hear from non-Catholics is how can we know Mary hears us if we pray to her? Actually, I’m usually told that she simply can’t hear us.   Some of the same people that believe that the devil influences our lives through temptation are saying that God would give the devil the ability to communicate through the spiritual realm, but not his own mother.

Catholics believe that as “one body” in Christ, there is no separation between us and those in heaven and that they can hear our prayers to them.  For a Biblical example, look at the Transfiguration (Luke 9: 28-36) when Moses and Elijah appeared with Jesus before Peter, James, and John. This passage offers Biblical evidence that there is not an impenetrable wall between heaven and earth.

Yet, doesn’t the Bible teach against going to God through anyone but Jesus?

According to 1 Timothy 2:5, there is only one mediator between God and man--Jesus.   People use Timothy to claim there is no mediator but Jesus, so we cannot go through Mary.  Yet, our friends on earth can pray for us.   If the prayers of our friends help, what better friend and helper could we have than the Mother of Jesus?  Timothy made it clear that prayers can be said for others:

“...as you help us with prayer, so that thanks may  be given by many on our behalf for the gift granted us through the prayers of many” (1 Cor. 1:11).

When we go to Mary, we ask her to help us with her prayers.  The Bible reflects the influence she has with her Son.  A good word put in by Mary proved to be quite effective at the wedding at Canan.   I’ve been to a lot of weddings but he’d never been to one where the guests drank all the wine.  There were a lot of miracles performed by Jesus that were recorded in the Bible, but they involved conversion and healings on a big scale.  But drinking all the wine and wanting more?  To top it off, Jesus plainly said it was not His time.  Yet, His mother’s intervention moved Him to perform His first recorded miracle.”   He did it for one reason--His mother asked Him.

I  take Jesus at His word and He plainly said it was not His time.  He made it His time in order to respond to his mother and it was recorded in the Bible as such.  Surely there was a divine plan Jesus followed from the start, and there must have been a reason his first miracle was performed at the request of His mother.   The miracle clearly shows the power of Mary’s intervention.  It was her intervention that began His public ministry and it is her words that lead us to her Son, “Do whatever he tells you.”

In the monarch of King David, as well as in other ancient kingdoms of the Near East, the mother of the ruling king held an important office in the royal court and played a key part in the process of dynastic succession.  She was honored alongside with her son. In fact the king’s mother ruled as queen, not his wife since back then the kings often had many wives, making their queenship next to impossible.

A number of Old Testament passages reflect the important role of the queen mother in the Davidic kingdom. Probably the clearest example of the queen mother’s role is that of Bathsheba, wife of David and mother of Solomon. After her son Solomon assumed the throne and she became queen mother, Bathsheba receives a glorious reception upon meeting with her royal son.

Since the mother of the king always ruled as queen mother, it only follows that the mother of the messianic king would play the role of the true queen mother in the everlasting Kingdom of God. Matthew emphasizes that Jesus is ‘the Son of David,’ who is the true King of the Jews establishing the ‘Kingdom of Heaven.’  With all the kingly imagery, it should not be surprising to find queen mother themes in the Gospels as well.

Consider Luke’s account of the Visitation.  Elizabeth greets Mary with the title ‘the mother of my Lord’ (Luke 1:43).  This title is significant.  In the royal court language of the ancient Near East, the title “Mother of my lord” was used to address the queen mother of the reigning king   Thus with this title Elizabeth is recognizing the great dignity of Mary’s role as the royal mother of the king, Jesus. Therefore, keeping in mind that Jesus descended from the house of David and the Bible repeatedly brings out the strong connection, Catholics are merely following the tradition already established and clearly laid out in the Bible.

A lot of Catholic practices relating to Mary, are also Biblically based, for instance, the Hail Mary.   “Hail Mary, full of grace, the Lord is with you”

“All Generations Shall Call Me Blessed”

Surprisingly, devotion to Mary was once very acceptable for all Christian denominations.  Anyone reviewing the writings of the biggest fathers of the Reformation can clearly see that, in spite of major disagreement with the Catholic teachings, they shared a very strong devotion to Mary.

Catholics continue the devotion to Mary that was present at the time of the Reformation.  By honoring Mary, Catholics fulfill Luke 1: 48-49, “All generations will call me blessed.”  We unabashedly call Mary our Blessed Mother.

God is the one who heaped unequal honor on a mere human being by inviting her to be the mother of God.  We are redeemed by the blood of her Son.  Jesus became flesh and blood of her flesh and blood.  Our earthly mother gives us life, while Mary, our heavenly mother gave us supernatural life by consenting to the plan God laid before her, to give birth to our Savior and in turn bring Him to us.  She gave birth to Jesus for our salvation.

Jesus, our brother, told us to follow Him.  If God has so honored Mary as the daughter of God the Father, mother of God the Son, and spouse of God the Holy Spirit, how could we do otherwise?  We are following Him by honoring Mary.

We look with reverence on everyone and everything associated with Jesus Christ.   And who could have been closer to Him than His own mother?  The highest amount of holiness would be required.

We build monuments to great people of much lesser stature than Mary (i.e., the Washington monument, the Lincoln Memorial, schools, streets, holidays, etc.).  By honoring a great American, do we dishonor God?  Of course not.  Anyone with qualms about honoring Mary should consider these inconsistencies.  Remember, we honor Mary, we do not worship her.  Her goodness is only a reflection of God’s greatness.

One last aspect to consider regarding Mary is the reported apparitions that have claimed to take place over the centuries. The Church itself is very slow and conservative about giving a nod of approval to any claim of Mary appearing on earth.  After much investigation, the Church does sometimes acknowledge that such a supernatural event has occurred.  Many miracles and conversions often result through these apparitions and many sites have been visited by hundreds of thousands of Pilgrims such as those at Fatima, Portugal, and Lourdes, France and Our Lady of Guadelupe in Mexico.  But on this issue—Marian apparitions—the Church does not require anyone to believe in them.  That is a personal choice.

For me, it was reading about her apparitions that filled me with a deep appreciation of her as my heavenly mother and actually led me to a deeper love of my Christian faith.  Mother’s have a way with their children, and Mary is no different.

(This article is largely condensed for my book, Catholic Truths for Our Children, Scepter Publishing. )