There is More than One Way to be a Good Mom 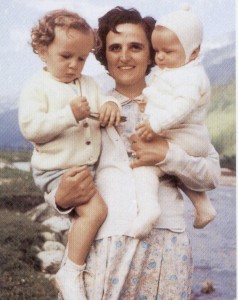 The word vocation means a “call.” In Catholic circles, it refers to a call from God. Many women receive a call from God to motherhood. It is a noble call, a challenging call, a call that will frequently bring a woman to her personal limits and to her knees in prayer. Yet, it has immense rewards. Those of us who have been called to this life should be both thankful for and humbled by it.

Given that it is such a hard job, motherhood should be supported by all of us, in all its forms. Unfortunately, this is not always the case. While the outside world may be very supportive of working mothers, in Catholic circles, it is often seen as a “lesser” choice.

If a mother “needs” to work, then it is acceptable, but even then I’ve heard other mothers say that they feel sorry for these mothers. The woman who chooses to work? She is frequently portrayed as selfish and not putting her family first. It is as if there is one version of motherhood that is held up as the ideal – the stay-at-home totally dedicated mother (if you managed to nurse exclusively for at least a year, homeschool your children, and have four or more children, you get extra points) – and all the others fall a little short.

As a homeschooling stay-at-home mother, I am begging people to reconsider that position. I believe that I have been called to my current way of life for this season of my life. It certainly wasn’t in the life plan that I had for myself. Rather, God led me here. I am very fortunate to be able to work part-time from home. My situation was different in my past, and it may be different in my future. I hope to always do what God wants from me.

Is it then possible to believe that others are called to different forms of motherhood?  I would argue that it is. Learning about St. Gianna Beretta Molla (1922-1962) expanded my own understanding of the vocation of motherhood. She is a patron saint of working mothers. She was an accomplished physician who loved her work. She truly felt called by God to be a doctor. She continued to maintain her own practice while having three small children.

St. Gianna would ultimately give up her own life so that her 4th child might live. That child followed in her mother’s footsteps and became a doctor herself. On the subject of vocation, St. Gianna wrote “What is a vocation? It is a gift from God, so it comes from God. If it is a gift from God, our concern must be to know God’s will. We must enter that path: If God wants, when God wants, how God wants.” God called St. Gianna to be both doctor and mother. She served God completely in both roles.

On a related note, Pope Benedict XVI recently stated that “it is necessary to concretely support motherhood, including guaranteeing professional women the possibility of balancing family and work. Too often, in fact, women are put in the position of having to choose between the two.” He encouraged governments to support maternity rights, including child-care centers.

God calls mothers to different forms of motherhood. Women should always pray to do God’s will in their lives. At the same time, all mothers should be supported and encouraged in their vocation, whether that vocation involves being a stay-at-home homeschooling mom, working full-time outside the home or any of the variations in-between. There is no one right way to be a mother. The only right way is what God is calling a mother to do at a given moment of her life.