Is Barbarism the New Norm? 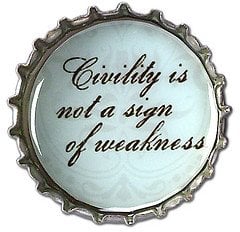 Civility is making the headlines lately, but if you dig a bit deeper, barbarism is the real story.

To wit: Last month, MSNBC.com carried this story from Reno, Nev.: “Six girls arrested for Facebook ‘Attack a Teacher Day’ invite.” One middle-school girl was arrested for inviting 100 fellow middle-schoolers on the social-networking site to participate in something she called “attack a teacher day,” while five other girls were arrested for responding to the invitation with threats against specific teachers.

Another story, this time from CBSNews.com on Jan. 31, was titled, “6 Pa. Students Arrested in Bullying Attack.” This incident involved a half-dozen 13- to 17-year-old high-schoolers who assaulted a fellow 13-year-old student, kidnapping him and hanging him from a fence post. He was not seriously hurt. Not physically, anyway.

Then there’s the MiamiHerald.com story entitled, “Teens Arrested After Facebook Threats Revealed.” This episode exposed a group of loyal middle-school gal pals — all ages 13 and 14 — who posted credible death threats against a student they thought had “snitched” on the boyfriend of one of the girls by telling school administrators he was in possession of a firearm.

Posts included gang-style verbiage including, “Ima help kill him. That punk ruined our lives!! Hes soo Dead!!!” and my personal favorite, “Oh that little b—— is dead. Just u have to show me who he is first then he is dead.”

Who cares whether you know the kid? Dead is dead.

Which brings us to … President Obama. In his address at the memorial service for those killed in the Jan. 8 Tucson, Ariz., shooting, the president said, “Let’s remember that it is not because a simple lack of civility caused this tragedy, but rather because only a more civil and honest public discourse can help us face up to our challenges as a nation.”

OK, I’ll bite. I’ll civilly and honestly point out that no amount of political posturing about the issue of civility will make a dime’s worth of difference when we’re bringing up a generation of barbarians.

Civility is based on the notion that there are certain social mores to which pretty much everyone subscribes. Not just rich people or well-educated people, not just the people from intact families or who are raised “in the church.”

Not long ago in American culture, there were rules of common decency, etiquette and public behavior, including the notion that there are things you just don’t say or do — like, oh, say … cuss in mixed company, talk publicly about sex or money, condemn someone’s religion or politics — and issue public death threats to your teachers and fellow students.

Yes, there were bullies and thugs a generation ago, when social mores were well-defined, and most everyone grew up knowing the rules, if not practicing them, but they were the exception, not the rule. Their unwillingness to follow social norms is what made them bullies and thugs.

I hate to be the one to burst our national bubble about the potential for greater civility, but we’re rearing a generation that seems to have no concept that there are things you just don’t do or say.

Why would they think otherwise? The media they consume only feeds the belief that they are free to say or do any barbaric thing that springs to mind. And worse, their parents either don’t themselves know what it means to be civil or won’t do the difficult work of taming their otherwise loutish, uncultured offspring.

We want civility in political discourse? That’s a big dream for a nation that doesn’t even have civility in the school cafeteria.

BOOK.eD: Reawakening by Barbara A. Mangi
Read
Is that normal?!?
Read
Man on a Mission: Mission Santa Barbara
Read