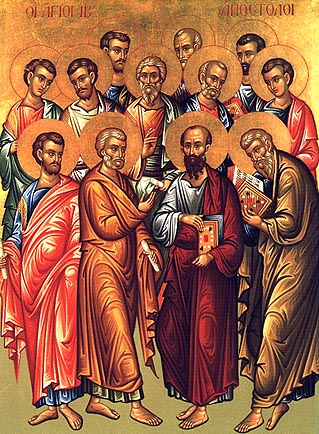 I love our Church and, the more I learn, the more I rest in the knowledge that the one, holy, Catholic and Apostolic church was founded by Christ on Peter. We are so rich who have been blessed with the grace to know this.

I wish everybody knew this. My biggest frustration is running into Christians who have very flawed or biased information about Catholicism. They are usually educated in evangelical circles and have a good knowledge of scripture- or rather, a great memory for scripture verses. I say this because time and time again, I find that the scripture they have been spoon-fed since birth is mostly eisegesis. The bible was never meant to be interpreted by verse but as a whole.

In some churches I have personally witnessed a lot of time spent on explaining what a bible verse does NOT mean as opposed to what it DOES mean with the sole agenda of disproving Catholic doctrine. Verses that are pretty obvious at face value are taken out context and explained away. One typical example is the Bread of Life discourse in John 6 or the need for baptism for salvation.

I recently crossed paths with a fundamentalist who was so vehemently opposed to the Catholicism she warned me of my impending doom if I continued to trust in the "traditions of sinful men". Somehow she had the mistaken notion that the Catholic church must be a result of many man-made traditions none of which originate in scripture.

There is truly a disconnect there. First of all, she is confusing erroneous human traditions for Apostolic Tradition. The CCC defines tradition this way:

#81 "Sacred Scripture is the speech of God as it is put down in writing under the breath of the Holy Spirit." And [Holy] Tradition transmits in its entirety the Word of God which has been entrusted to the apostles by Christ the Lord and the Holy Spirit. It transmits it to the successors of the apostles so that, enlightened by the Spirit of truth, they may faithfully preserve, expound, and spread it abroad by their preaching.

#82 As a result the Church, to whom the transmission and interpretation of Revelation is entrusted, "does not derive her certainty about all revealed truths from the Holy Scriptures alone. Both Scripture and Tradition must be accepted and honored with equal sentiments of devotion and reverence."

#83 The Tradition here in question comes from the apostles and hands on what they received from Jesus' teaching and example and what they learned from the Holy Spirit. The first generation of Christians did not yet have a written New Testament, and the New Testament itself demonstrates the process of living Tradition.

The disconnect is that she was using the very bible that was SAFEGUARDED by the Tradition of the Catholic church and declared canonical by the authority of bishops (through the Holy Spirit) to try and DISprove the need for the Catholic Church or the priesthood or bishops or Tradition or anything but the bible alone. That's like saying to a child that his mother was irrelevant in bringing him into the world. A child without a mother is an orphan and herein lies the problem.

An orphan has to make his own way in the world. He has nobody to turn to for guidance and for authority. He makes his own way. He may be a good child but a misguided child who has lost his family history.

When Christ promised not to leave us orphans he meant to leave us a VISIBLE church- a mother; a visible authority, guidance and protection. He said He would build his church on Peter. We do not think Peter built the church. We do not rely on the "traditions of sinful men". We believe it is the Holy Spirit's power safeguarding Christ's teaching to us. We know that if it were up to mere men our faith would have been lost long ago. But because Christ promised that not even the gates of Hades would have power of this protection- that this protection was under "lock and key" we know we can trust in His promise.

If Christ not leaving us orphans by sending the Spirit to guide us only meant that each denomination had to fend for themselves and trust that they alone have the correct interpretation of what the Holy Spirit has revealed as truth, He could have skipped over this whole "scene" with Peter and gone straight to Pentecost. It can't be every man/church for himself. As we can see, this is very problematic. Does the Holy Spirit teach one church that infant baptism is ok and then another that it is not? Sure, they will say that those things are nonessential or don't matter but that doesn't fly. He meant for us to be "one" as He and His father are one.

Christ prayed in a very strong way for unity in His church. He gave us a visible head. He gave us "Peter the Rock" ,not "Peter the Pebble". The rock is Christ IN Peter, not Peter himself or Peter's statement of faith. Peter's authority is evident throughout scriptures particularly in the circumcision dispute.Once Peter spoke the issue was settled. After Christ revealed Himself to Paul, Paul went first to Peter to get "okayed" as an apostle. There is a reason for that. When Christ says something, He means it.

Paul knew without doubt that it was Christ who had appeared to Him but he went to Peter in obedience. Jesus knew he did not need baptism but He went to John to get baptized in obedience. Mary was not impure but went to perform the cleansing ritual after Christ's birth in obedience.

What happens when we don't obey our parents? We learn things the hard way. In throwing out Tradition and holding only on to Scripture only you have kicked out one leg of a stool and it won't stand. Scripture alone is like that orphan looking through old family photo albums without his mother to tell him who his Uncle Benny was and what really happened in the Fourth of July family photo. He has only his best guess and vague memory to help him remember. How can somebody know for sure what the authors of scripture intended without the assurance of that Tradition that passed it down to us?

Be thankful today for the gift of Mother Church who shows us the surest way to go and guides us safely, not coincidentally like our Mother, Mary, who does the same. Be thankful for both Tradition and the holy Scriptures that have been kept intact because of the promise of our Father. Be thankful for the safekeeping of our family album of Saints- our true relatives who have not been separated by death because we are one Body. Not only are we NOT orphans but our family is HUGE. We are so blessed!