Secret Millionaire: TV for Your Family? 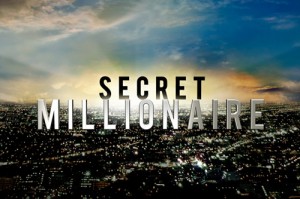 Tonight "Secret Millionaire" premiers on ABC at 8 pm ET.  I had the pleasure of watching an extended preview of the show this week and it looks to be a great program we'll want to share with our families.  Here's the premise:

The secret's out! Some of America's most successful self-made millionaires are embarking on a truly incredible journey. They will spend a week in the country's poorest areas and ultimately reward some unsung community heroes with hundreds of thousands of dollars of their own money.

Based on the hit UK series of the same name, each episode of Secret Millionaire follows one of America's most successful business people for a week as they leave the comforts of home behind. They'll keep their true identities hidden while living in some of the country's most impoverished neighborhoods.

Residing in local housing on welfare-level wages, these "secret millionaires" will try to find the most deserving people within the community. We're talking about those selfless individuals who continually sacrifice everything to help anyone in need, and ultimately encourage others to do the same.

Throughout this incredible experience, the millionaires will come face-to-face with some truly extraordinary people who put their own needs aside for the sake of others. At the end of the journey, they'll reveal their true identity and donate their own money to these local heroes. It's a life-changing moment you won't want to miss.

I will be tuning in tonight and invite you to watch along with me and share your comments here.  I hope the emphasis on using our gifts to help others will show in this show and that it will yield a spirit of good stewardship and charitable giving for our families.

Do you think television has the power to make a real difference, or is this simply another "feel good" moment that won't make any lasting change?