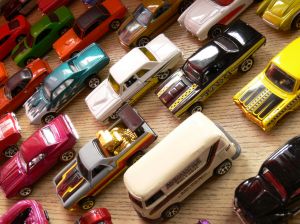 I have fond memories of Mike’s little Toyota.  “Jacinta” was a stick shift auto painted Blessed Mother blue, with a pristine interior and nary a bumper sticker.    Mike had navigated Jacinta through crazy Bronx streets to pick me up for our first date, and almost three years later, to drive me to the maternity ward of New York’s Einstein Hospital, where Grace was born.  After Mike, Grace, and I left the city for Pennsylvania, Jacinta became the family car, transporting the three of us to church, the grocery store, and grandparents’ homes.  I would also drive Jacinta to weekly La Leche League meetings, first with Grace in the back seat, then with Grace and Ben in the back seat, and then with Grace, Ben, and Clare in the back seat.  At this point, the old conundrum of moving fox, geese, and grain across the river seemed easy compared with the challenge of transporting kids plus parents plus a load of groceries in a compact car.

It had become clear that we needed a bigger vehicle. I was happy to hand the car-buying job to Mike, since all I knew - or ever needed to know - about cars was that driving a sleep-resistant toddler around in one would get him to nap. The car Mike chose was a seven passenger van.  It too had a pristine interior and nary a bumper sticker, but life with kids taught us that the newness would wear off soon.  Very soon.

Francisco took Jacinta’s place in the garage.  In those days, we actually used our garage to house our car.  That was before the garage space was taken up by a stand-alone freezer,  eight boxes of saleable goods destined for a someday garage sale, a packing-box play house, a pink suede wing chair donated by my mother which was - heh - intended for our living room, equipment for eleven different x-treme sports, and all the trappings of a garage band.   Because the garage was attached to our house, the kids thought of it as a playroom, and Francisco as a giant plaything.  At various times the car served as an enemy camp, a cozy cottage, a space base, and a dining hall on wheels.  Sometimes I’d even drive it.

Francisco was abused loved by our family for almost ten years.  His standard issue interior of kitten gray became a distinctive snow-leopard mottle. His tape deck, which had provided entertainment for the young ones on long car rides, eventually fell to an imaginative toddler who saw its potential for use as a bank, and forced a penny into the deepest recesses of its tape slot.  In Daddy’s absence, Francisco’s ventilation system was turned on full blast and used to convey tiny paper wads from the back seat to the front, until it was ultimately clogged by an accumulation of unconveyed wads.  (Daddy never figured out the cause of the system failure.)

Francisco was retired when I became pregnant with our sixth child.  Mike went out shopping one evening for a used car, and returned a couple of hours later behind the wheel of a colossal 15-passenger van.  Obviously, the car had been owned by a little old lady: the one who lived in a shoe.

According to Mike, the color of the van was the red of martyrs, so he named it Thomas after St. Thomas More.  It was a suitable name for a car that was a real trial to drive.  After all, handling a vehicle the size of Dodger Stadium can take some getting used to.   But the kids took an immediate shine to our gargantu-van, as did friends and neighbors who didn’t have to drive it. Embarrassingly conspicuous on our town’s narrow residential streets, the lumbering red van was actually a gentle giant with pitiably slow pickup and a happy patina of bumper stickers on its rear.  Neighborhood kids would come up to the parked van to measure their height against its tires, and whenever we drove our car around town, neighbors we’d never formally met would wave as we passed.  Even the township police came to recognize our car, and this was before a certain unfortunate incident involving a stop sign.  The only folks who didn’t welcome the sight of our approaching van were the guys at the local car wash, who flinched at the thought of having to shoehorn it into their facility.  Lucky for them, we could afford to have the car washed only twice a year at most, since its size required extra everything.

Sixteen years later Thomas, though ailing, is still with us.  He dozes away the days in our sunny driveway, since he is too tall to enter the garage (and anyway, the garage is still stuffed to the joists with paraphernalia of a non-automotive nature).  Our kids are growing up, and will soon be out on their own.  Rarely does the entire family travel together, and in fact, Thomas’ rear seat was removed long ago to make room for the inanimate stuff that has come to replace flesh-and-blood passengers.  My daily errands are run in a zippy little five-seater with good mileage and - oh, joy! -  a working CD player.

I’m content with my relatively new, but utterly unremarkable mode of transport.  So are those children who still accompany me on my errands. But in my heart, and even in the hearts of less sentimental family members, Jacinta, Francisco, and Thomas will always hold a special place.

For Thomas, the car that transported her from infancy onward, eleven-year-old Helen has in mind a more tangible kind of special place:  “When Thomas dies, could we have him towed into the backyard?  He could be useful as a clubhouse.”