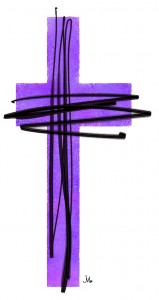 So, how’s your Lent going?  Is it all you thought it would be?  Have you kept your Lenten promises?  Well, my Lent has not been all that stellar.  I struggled with what to give up this year. I finally settled on ridding myself of sweets and coffee mostly because I couldn’t think of anything else.  Afterwards, I felt like I was being childish.  Only kids give up sweets.  So that idea made it easy to cheat.  And I did.  And then I felt guilty. But then I felt silly because only kids give up sweets.  ARGHHHHH!

This Easter, I will be celebrating my 14th year as a confirmed Catholic.  There was so much I didn’t know or understand 14 years ago.  And one of those things was Lent.  My understanding of Lent was limited to no meat on Fridays and that you should probably give up something.  I am sure I was told more about the season, but I didn’t really understand the why behind Lent so that info was lost on me.  When I converted, I still had a lot of Southern Baptist ideals to let go of and the season of Lent was one of them.  But over the last 14 years, I have gained a better understanding.  Lent is a time to suffer a little for the Lord.  It is a time to fast from the pleasures of the world.  It is a time to give until it hurts.  It is a time to pray like time doesn’t matter.  It is a journey we take so that we may be reborn, renewed and refreshed in our faith and our Lord.

There is one Lenten promise that I have been working very hard to keep.  The Lord has impressed upon me over the last few months how important it is to understand His suffering- how He suffered, what He felt/feels, and why He suffered.  I was really confused as to why He wanted me to go on this journey with him.  And then in Mass one night, He told me: His love is greater than His pain.  By understanding His suffering, then we have a greater understanding of His love. So, this Lent, I decided to spend some time understanding the Lord’s suffering.  I came across an independent bible study called People of the Passion by Stephen Binz (Threshold Bible Study).  This study takes the reader into Christ’s passion through the eyes of the eyewitnesses. I have found it very interesting to look at Christ’s last moments from this perspective.  I’ve put myself in their shoes and wondered how I would have faced the Lord.  As part of my Lenten promise, I have been blogging my way through it (www.bloggingthroughlent.blogspot.com).  You can visit the link if you would like a closer look at this experience.

So I guess my Lent isn’t a total bust.  I am doing my best to keep up with this bible study.  That was the last shred from my broken Lenten promises I was desperately holding onto.  But then, I went to the Stations of the Cross this past Wednesday and Father gave a brief talk about the stations before we began.  And he looked right at me and said, “I am sure all of us have broken our Lenten promises by now.  But that doesn’t mean you should give up.  Jesus fell three times on His journey, and He didn’t give up.  Keep trying.”  So, now I need to keep trying to give up sweets?  Really?!  ARGHHHHHH!