The Facebook Generation: Narcissism, Sexting, and the Decline of Empathy 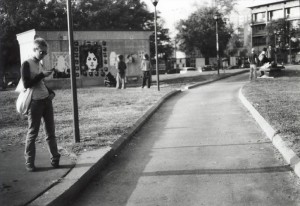 Two recent stories suggest that a disturbing practice has found acceptance among teens and young adults: broadcasting the sexual misbehavior of their peers, especially girls, on a massive scale within hours. Photos preferred.

Is it just gossip, gone digital? “Mean Girls,” with a sexual twist?

I don’t think so.

Some commentators too easily dump these incidents into the overflowing bucket of cyber-bullying or dismiss them as teen-age drama, writ large. But these episodes deserve a second look.

A few months back, a Washington state eighth-grader named Margarite “sexted” a nude, frontal photo of herself to her new sort-of-boyfriend. Within weeks, their fledgling relationship died.

The photo lived on.

The boy sent it to another girl who captioned the photo, “Ho Alert!” and added instructions: “If you think this girl is a whore, then text this to all your friends.” The photo instantly ricocheted, via text, from one social circle to another. Within hours, students from four different schools had ogled the sexter’s naked body and passed the photo on. The eighth grade girl was devastated.

The second situation occurred in the upscale suburbs of New York City. Someone created rankings of 100 allegedly sexually adventurous girls and boys from the surrounding school districts and circulated the lists using Blackberry Messenger.

One teenager (who claims he was not the original creator of the lists) quickly created a Facebook page called the “Westchester SMUT List” (“SMUT” meant “slut,” thinly disguised to evade Facebook restrictions), and posted only the girls’ rankings (including full names and descriptions of sexual activity).

Within hours, thousands of people saw the list. Over 7,000 of them “liked” the Facebook page that trashed the girls’ reputations.  And with one click, each of those viewers magnified the damage, publicizing the page instantly to his or her Facebook friends.

The sexual behavior of the 8th-grader and of the SMUT 100 (to the extent the reports are true) reads like an MTV script. And that’s certainly a huge problem.

But let’s switch focus, for a minute, from the girls to their enthusiastic “audience” of thousands. Their behavior may well reflect the bigger problem.

Consider the smut list. What does it mean when thousands of young people swarm, within hours, to the site of their peers’ humiliation? (Imagine piranhas in a feeding frenzy.)

Meanness, maybe. But narcissism is a likely suspect, too.

The Facebook generation shows an overwhelming desire for self-promotion, to weigh in, to be in the know. Want to be important? Dispense scandalous information.

The teens who “liked” the list not only didn’t care that others knew they’d seen the list and passed it on, they wanted others to know that they’d done so. Being among “the first to know” matters too. It’s a sure way to build social capital—be the source that sends others to the newest, most outrageous virtual place.

No shame, no hesitation, no reticence. In their narcissistic stampede towards Facebook fame and “firsts,” thousands trampled on the dignity and reputations of very real people. And they didn’t even care.

Why? Because, in a given moment, narcissism blots out both moral sense (do their consciences even register slander? detraction? cruelty?) and a sense of empathy.

(Many ethicists believe that empathy is at the heart of morality.)

An empathic person in this case would grasp the pain, shame, and humiliation experienced by the girls on the list—and would never add to their misery by passing the information on, especially because it might be false. A narcissistic person would seize any opportunity, including the humiliation of others, to vault back into the center of attention.

Narcissism gave a good showing at the Westchester Smut List.

There’s a second factor at work here as well.

In today’s culture, sex is entertainment.  It doesn’t need to be either personal or intimate—a lesson the Facebook generation has learned well.

It’s not surprising, then, that these young people easily accept the idea that women are sexual objects. Depersonalized sex is everywhere, in ads, music videos, TV, movies, teen websites, and, of course, pornography. Immersed in it, they can’t help but be shaped by it as well.

Take, for example, the teens recently interviewed by The New York Times on the topic of sexting. For this sex-saturated generation, sexy photos become a strikingly impersonal part of the mating dance.

One girl puts it this way: “We see virtual images all day long, so if someone sends you a [naked] image, it loses the identity of the person. It’s just a picture.” A teen-age boy in the group added helpfully, “And usually the face is not in it.“

It’s the very definition of depersonalized sex: the most “personal” aspect, a face, is out of sight. But the naked body still titillates and makes the rounds, by cell phone and text.

And even when the photo does include the person’s face—as it did in Margarite’s case—her peers had already lost sight of the real person who would be mortified, shamed, and crushed with regret as they passed her picture along. She was just a body, grabbed, groped, and used as an object for pleasure (or humiliation) in the virtual space. Her reputation became a plaything as well.

What’s missing is any sense that these girls are persons, not sexual objects. And what’s lost, among other things, is the privacy and space that would allow these adolescents to mature, repent, change course and begin anew. Instead, they’ve been humiliated on a grand scale, and will be haunted by the exposure for years.

On the plus side, at least the girls know they’ve gotten off track and need to change.

But their peers—the thousands steeped in depersonalized sex and searching for the next narcissistic shot at popularity—they have no idea how far off track they are.

And the real question for our culture is…What are we going to do about that?