The Perfect Gift for First Communion 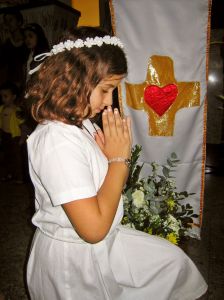 Spring is the time for shopping for that especially appropriate, but also surprisingly unique gift to memorialize the Sacrament of First Communion.  Until recently this was a daunting prospect for me, because I am not an avid shopper.  However, before hitting the mall or the Internet this spring, I polled a group of Catholic moms for creative gift ideas.  Most of them did not have any, but all said that it was really the prayers behind the gift that were the important part, something to which I could heartily agree.  Unfortunately, that still didn’t give me anything more creative to put inside a box covered with wrapping paper.  Then one mom, Lisa, shared a truly ingenious idea that I would like to pass on.

Instead of giving her young son an object for First Communion, Lisa gave her son a place.  The place she gave him was a cozy area in his room in which to read his Bible and to connect with God through prayer.  It included a small, but comfortable chair above which Lisa hung a crucifix.  I could also see adding a small chest of drawers or a shelf on which to gather all his other First Communion gifts.

Lisa said she had gotten the idea after her son asked her if he was going to feel any different after receiving the Precious Body and Blood.  Lisa urgently wanted her son to know, that “yes,” he would feel closer to Jesus, but experience had told her that this closeness would require more than simply attending mass once a week.  The idea was therefore born to support her son’s initial and ongoing Eucharistic experiences by creating for him a special place to be with God at home.

I think Lisa’s gift idea is brilliant on so many levels.  Children who are at the First Communion age are usually still in the literal stages of intellectual development.  Like Lisa’s son, they may giggle and wonder things among themselves like, “What will God taste like?”  They have a great desire to “feel” something, ideally something miraculous like a lightning bolt, after saying, “Amen.”

Now, the reality is that most often there are no supernatural sensations associated with the receiving of Communion.  Because of this, my natural response to the wonderings of First Communicants might be to moderate their expectations by saying something dull like, “No, receiving Communion probably won’t feel like being zapped with a lightning bolt, but don’t worry, you don’t have to feel anything for God to be truly present.”   By responding in this way, however, I would miss the opportunity that Lisa seized, namely the opportunity to teach a child how to not just receive the Eucharist, but to live the Eucharist.

For some incredibly courageous, but largely mysterious reason, the Creator of the Universe has invited us to cooperate with his power and grace in our pursuit of heaven.  Jesus said in the Gospels that he is the Bread of Life come down from heaven. However, in order for us to receive that Living Bread, we must collaborate with him by baking physical bread and by maintaining the priesthood in authentic apostolic succession.  This dynamic interplay of God’s saving grace and our faith and action can be heard at mass when the priest addresses God by saying, “Through your goodness we have this bread to offer, which earth has given and human hands have made.  It will become for us the bread of life.”

This invitation to us from God to cooperate with his saving grace is recorded in the Bible many times.  At the wedding feast at Cana Jesus transforms water into wine, but not until servants provide the water (John 2:1-11).   On a windy hillside Jesus multiples a meager five loaves and two fish in order to feed over 5,000 people, but not until a young boy supplies the initial, meager offering (Luke 9:12-17).  Yes, Jesus could have made these things appear out of thin air, but it seems he prefers to give us the dignity and joy of cooperating with him instead.  Really, what an outrageously courageous love God has for us!

Giving First Communicants the gift of a place at home to pray teaches them how to begin living in this outrageous love.  It teaches them not to just show up to mass empty handed and expect lightning bolts, but to grow at home and bring to the altar something with which God can work; that is, an already living faith ready to be transformed and multiplied.  By supporting our children’s growing faith in this Biblical way, I truly believe that we can help their Eucharist and all their faith experiences to be grace-filled and deeply satisfying, even if not detectably supernatural.

I am grateful to Lisa for this great gift idea for First Communion, but come to think of it, a special place to pray at home would be an ingenious gift for any occasion, even if given to oneself.