Disorientation – A Review & A Giveaway 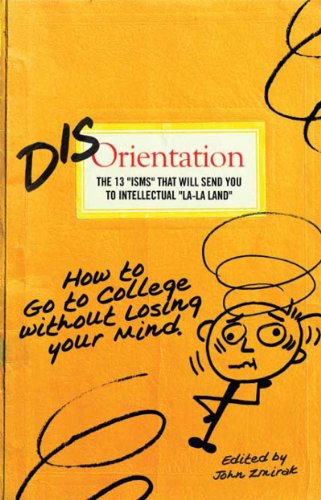 I like to think that I like philosophy, but maybe I just like the idea of philosophy. When my husband took a philosophy class a few years ago, while he was working on his degree, I insisted we keep the textbook. It’s still sitting on the shelf, unread by me. I still might get to it, though…someday…

I was intrigued, then, to read Disorientation. It’s philosophy, but in a debunking sort of vein. This is a collection of today’s great Catholic thinkers showing me, the common reader, what’s wrong with the popular philosophies and mindsets that pervade culture now, including more than one that I didn’t know by name.

The list of contributors is a who’s who, and the writing is just what you’d expect from this gang of excellence. It’s arranged by year—Freshman, Sophomore, Junior, Senior—and is intended to be for college-age people. I think, though, that it’s a great book for any adult, especially if you want to understand the mindsets that are prevalent today.

What I enjoyed the most was reading something that prepared me for discussions that involve these multi-syllable philosophical terms. Each essay has its own recommended reading and is written to be understood quickly.

Whether you’re a college student, a parent, or just, like me, someone who wants to know, you’ll find a great resource and good education in this book.

Thanks to Aquinas & More, we have a copy of Disorientation to offer as a giveaway. Leave a comment by Friday, July 15 at Midnight PST, and we’ll randomly draw a winner!