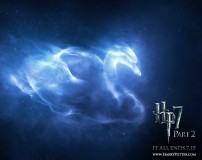 Editor's Note: I want to personally thank my dear friend Maria Morera Johnson for allowing us to reprint her recent articles on Harry Potter. As a faith-filled Catholic mom and a member of the SQPN’s Secrets of Harry Potter team, Maria shares a unique and trusted perspective on this popular series. Join us again tomorrow for the second part of Maria's perspective on the books and movie. LMH

In case you were wondering, yes I went to the midnight showing of Harry Potter and the Deathly Hallows.

And yes, I am suffering from a lack of sleep today, but not so much that I don’t want to share my experience with you. I think this is especially relevant because many of my readers come from friendships I’ve made through Catholic media. I often don’t think of myself as a “real” producer of Catholic media although I am both a practicing Catholic and a blogger and podcaster (perhaps more accurately a commentator on a couple of podcasts).

In spite of my discomfort with the label, I cannot deny that I am both Catholic and a producer of new media, so today I find myself capitalizing on both experiences to delve into the world of apologetics. It’s not what you’re accustomed to hearing about when you see the word apologetics, though. You see, I am about to launch into a defense of Harry Potter.

Yes, I am a Harry Potter Apologist. Let’s put that out there right now so you can either call me a heretic or a hero. In either case, pray for me and my on-going conversion. I can’t have enough people praying for me. That’s a good thing.

But back to Harry and his wizarding world. I love the stories. They are well-written and full of all kinds of interesting and wonderful studies of the human condition, mythological constructs, and yes, supernatural events. It’s not unlike many of the other stories that have become a part of our cultural literacy in the last couple of hundred years.

While I am sometimes hesitant to speak directly on Catholic themes because I feel ill-prepared and poorly trained in that area, I can speak from my training as a professor of literature (in fact, you can here me expound on a lot of this stuff in SQPN’s Secrets of Harry Potter, a podcast that explores the literary, mythological, historical, and religious themes of the series) and join a conversation that resurfaces in Catholic blogs and social media every time a book or movie in the series is released.

I do not believe Harry Potter is intrinsically evil, nor do I think it directly, or even indirectly, makes our children into little pagans. I do believe, however, that it is a parental right to determine what one’s children read, so I would no more label the series evil than I would call it essential reading. That is up to the individual to decide.

Tune in tomorrow for another column from Maria.