What Can We Do For the Non-Believers In Our Lives? 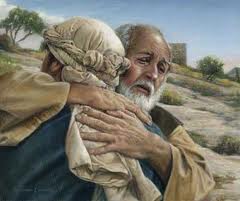 They are all around us. At work, at home, in the stores, on the road. For some of us, they are part of our family. Perhaps you married into a family of non-believers. Not just non-Catholics, but non-believers all together. You are a part of their family and they are a part of yours. There should be some sort of harmony, or at least you should be somewhere on the same page, yet you are worlds away.

It's difficult to live in your faith and at the same time be in harmony with those who embrace the world and all its trappings--materialism, hedonism (pleasure for the sake of pleasure), money, success, lust, notoriety, and so on. Temporal promises and gains. Now let's be honest--these things enter into all our lives at some point or another and in different doses, and we can't help but become tempted. Sometimes it comes upon me when I'm flipping through the latest Williams-Sonoma catalog (small dose), or when I look at magazines and conclude that our house should look just as beautiful right now (big dose), or when I wish my husband would be strong and healthy already, like he used to be (very big dose).

But what happens when the worldly gifts are some one's goal in life, when they become his obsession? How does a Catholic relate? We all struggle with this, especially me. I have known folks who live by and in the world for many, many years. They know me, they know how my husband and I prioritize our life and raise our children in the Catholic Faith, and yet my eyes have seen no change in them. Each year, they strive to win more awards, make more money, buy more things, and travel the world. They take barely a notice of Christmas or Easter, and Lent is simply the past tense of the act of lending out moola. It makes me a little anxious, and I fall into a sea of questions. Have my family and I not influenced them even just a little bit? Just what am I expecting from them anyway? A major transition? A conversion? Are my prayers and efforts useless? Why aren't they happy? Do they see that I'm happy? Don't they want a more peaceful life? Are they happy worrying, worrying, worrying? How do they carry their load without Christ? Why are they on the fast track? Don't they get tired? To whom do they turn when they are overwhelmed and scared? Themselves? Money? Buying more things?

One day, I took my frustrations with  me to confession. Each year, during the holidays, my angst from watching friends and family embrace the world while rejecting Heaven mounts so high, it needles me to take my eyes off Heaven myself. And I become angry and very, very impatient.

Father assured me, "I'm sure this is frustrating. You will just need to keep trying to show them the love of Christ. And pray for them. That is all you can do."

I was hoping for a magical formula, but deep down I knew he was right. You know, when Christ taught the apostles how to be servants of God, he didn't start a major scholarship program, launch a non-profit organization, or dig wells all over the world. (All good things, of course.) No, he did something very, very simple. It was so simple, Peter was appalled. Essentially he said, "Wash my feet? A slave doesn't even do that!"  But Christ corrected him. It is simple, loving, and selfless. Here is where the work of Christ begins. Something as simple as a prayer for someone you find hard to love, for someone who openly rejects Our Savior.

And it can change us, too. Set out to change someone else, and prayer winds up changing us. At the very least, prayer reminds us that they, too, are children of God, even if they don't know it or if they choose to reject Him. They sadly have given up their birth right, but knowing that Our Heavenly Father, the one we love most, loves them, too, can make things a little easier and put our hearts with the One who is truly hurting. Imagine being Our Heavenly Father, who loves every tiny piece of His Creation way beyond human comprehension...and then to be rejected. He waits and longs to hear from them, but He doesn't. They are lost to Him...and He still waits.

This makes me think of the Parable of the Prodigal Son (Luke 15:11). My favorite character is the father.

When the son finally decided to go home, his father was waiting for him. Think about what that means. He must have been waiting and watching a little bit each and every day, to be sure that he wouldn't miss his son's return. Every day, anxiously waiting to see if his son just might be coming around the bend. He faithfully waited and didn't give up. And when the father spotted him, the boy was still far down the road, probably rehearsing over and again what he was going to say to his old man, mustering up the courage and resolve.

But there was no time for that as far as the father was concerned. When he spotted his son making his way toward home, he ran down the road to meet him as fast as he could.

Of course, through the father in this parable, Christ was depicting His own Father in Heaven. Does Our Heavenly Father worry about non-believers--those who think they can go out into the world away from Him, do all things on their own and be their own masters? Christ made it very clear that His Heavenly Father does indeed love and worry about his prodigal sons and daughters and would celebrate their return to His home of faith. (Of course, in many ways we all become prodigal children at some point and in small ways, but that would be another post. This post is describing those who have made it their life goal to be their own masters and who outwardly reject God and Christ.)

I like to add one more image to the story, something any parent would appreciate. Can't you picture the father longing to hear news of his lost son? With so much silence between them, wouldn't he long for any kind of news, any kind at all?

If a father heard nothing of his son who went out into the world, imagine how comforted he would be to receive a letter from a friend, saying "Your son is safe. He is with me."

Father was right: "Keep trying to show them the love of Christ. And pray for them." At the very least, we can say to Our Heavenly Father, "He is with me." At least it's a start. I understand. I struggle to do this, too. I do.

Editor's Note - I have removed some of the comments on this post due to personal attacks on others. Positive discussion on this important topic is appreciate but derisive comments aimed at the author or other commenters will be removed. LMH