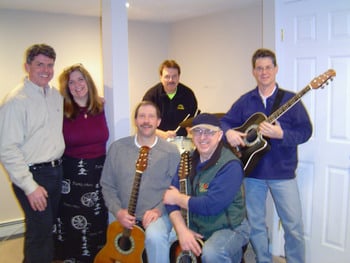 Catholic music seems to come in all shapes and sizes these days. A group like Living Waters shows the staying power of the art form -- this amazing group has been playing together, creating beautiful music for God, for over thirty years. I'm pleased to share my recent conversation with Mark Lajoie of Living Waters and hope you'll check out their great music today.

Q: Please introduce yourself and your family to our readers.

We are Living Waters, a Catholic music group that has also been a faith family for 35 years.  LW started as a house music ministry group at a retreat center in MA in 1976. In imitation of Lighthouse in Ann Arbor it expanded to a full production with dance, drama, lighting and sound production. Travelling in our bus we played hundreds of concerts in at least 8 states, including Yankee Stadium, the World Marriage Encounter Convention, Hartford Civic Center and more. Many people came and went, but the basic band has been what we list on our ReverbNation site. We did many styles of music and venues, including liturgies, conferences and Teen Retreats, but as time went on, a lot of our music were original compositions. Many of us got married within the group and we settled, had kids and continue to meet and pray together. Actual performance has been rare lately, but we are working on preserving our original music and possibly recording & performing more soon. (We have now achieved our long-term goal of a digital album release, “Refresh”, on Amazon mp3 and more.)

Q: How did you get your start in music and specifically in Catholic music?

Personally, I have quite a conversion story.  I tell much of it in blog entries on my personal blog and on the band blog. Basically, as a teenager, I had reached a nadir of despair from the neglect of an alcoholic father and the resulting poverty. In 1971, I grabbed onto the guitar as a way to express myself.  In 1973, I had my conversion experience at a retreat house in Maine through the Charismatic Renewal.  Several amazing signs or miracles occurred to confirm my faith, probably because I was so broken and needed the special help so much.  There I met many of the friends who would eventually become my band mates.  Many of us moved to a retreat house in Massachusetts and met the rest of the band there. Through their love, friendship and prayer I revived and began to use my guitar and natural talents to write inspired songs. 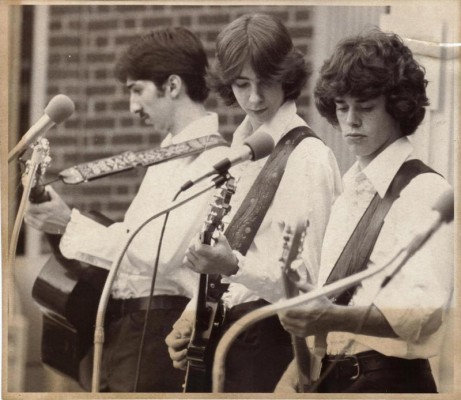 Q: What inspires your music and how would you describe it to readers?

I am the main songwriter, although our keyboard player, Mike McBride has also written some of our most notable songs. Most of my songs simply ‘come’ in a rush of inspiration.  I truly believe they are something like what Paul calls “inspired songs”.  I can feel the Hearts of Jesus and Mary aching to reach others and touch them deep within.  My wife and I were praying for the great John Paul II, and “Peter the Rock” flowed out.  We sent it to the Pope through Ambassador Ray Flynn; he accepted it and sent me an Apostolic Blessing.

Q: How does your secondary career as a teacher fuel your vocation as a musician?

I teach Religion to Freshmen in a Catholic school, specifically, Basic Catholicism and Old Testament.  There are many opportunities where I am able to use our music.  For instance, when I explain the Papacy and primacy, “Peter the Rock” serves as a perfect Bible study to explain the formation of our Tradition.  Recently, this Lent, I played “I See His Face” when we did the Veronica Station of the Cross.  They really love it and respond and I can see some of them coming alive inside in heart and mind.

Q: What are some of your musical influences, both Catholic and secular? Who are your favorite musicians?

Early on?  The BEATLES, by far.  Also, Peter, Paul & Mary, The Byrds and later, U2 had a massive influence on all of us.  Our guitar player loved Rush, The Who and I liked Yes.  I also loved Handel’s Messiah and other classical music (and you can hear that in my “Apostles Creed”).  However, in the 80’s, it was CHRISTIAN ROCK that I fell in love with, especially, The Second Chapter of Acts, Petra, Servant and groups like that. 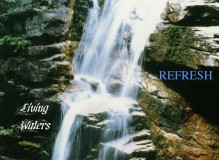 I think we have a rare, priceless opportunity for a Catholic band.  We are climbing on the ReverbNation Christian charts and are now one of SEVEN “Featured” Christian artists.  There are several things people can do to raise the profile of Living Waters (and other Catholic bands) and spread our music:

I would also recommend other Catholic rock bands like Katholicus or bands on Catholic Rocker.

I would like to stress the urgency of reviving the Catholic faith in today’s language and culture.  John Paul was dead right:  we must form a new civilization of love to transform our current culture of sensuality and death.  If you can create something that reflects your faith and engages the very real power of the Holy Spirit, using today’s new tools and sensibilities, do it!  AND, be a faithful consumer and supporter of those others who are trying to do this.  Vote with with your feet and your wallet only for “what is true, good and lovely” in the modern idiom.