The Splash Mat and My Joyful Amish Neighbors 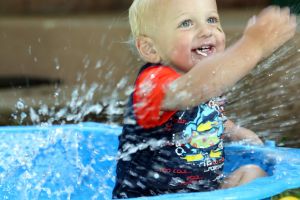 As today was a hot and muggy summer day in Wisconsin, I, with the baby in one arm, ushered my irritable, post-nap preschooler and toddler out with the other into the thick air, promising them refreshment with magical words like “pool” and “sprinkler”. What I had found in the basement of my parents’ house was a mix of the two: an inflatable oasis, complete with an also-inflatable palm tree, inflatable rainbow, and inflatable dolphin. In fact, it looked like a lot of fun, and it was—if you were their size. I took to unfurling the splash mat and hooking it up to the hose.

My four-year-old turned on the water, and the thing took to life, growing to the proper size and shape, all the while shooting little streams of water into the air. It looked great. Except for the palm tree, rainbow, and dolphin, which still looked deflated.

I knelt down on the ground, and with my first blow into the rainbow, I knew this was a much bigger job than I had wanted to get in to. What was today, I thought. Saturday. The poor. The spiritually poor. My family. I’ll offer this up for them, I thought, as I tried to commence with a smile.

I started with the rainbow because it was the coolest-looking and provided a little shelter from the icy sprays of water shooting up through the rest of the mat. I took a deep breath and exhaled. Man, this was going to be a lot of work, I thought. For the poor, I thought, and I happily blew again. Hard work, but what a luxury this is. I thanked God for our chance to be together this afternoon and for our clean water. Another puff. I prayed for the poor who didn’t have inflatable lagoons. Another breath. And for the spiritually poor. A few more puffs. God, may you please puff up anyone who needs it with Your grace and peace. Some more puffs.

I was so pleased that God had chosen such a tedious task for me that I hardly noticed that the baby had crawled into the center of the mat and had frozen, arms up in the air, as a chilly stream of water beat into her chest.

I looked up just as she was about to cry. She let out a ferocious one. I quickly put the cap back on the rainbow, wrapped her up in a towel, and set her back on the grass. The other two were still happy making little splashes on the pad with their toes.

I examined the rainbow and saw that I hadn’t gotten very far in the past five minutes. Was there something wrong with the air spout? As I bent over to peer inside, a stream of ice cold water shot up my shorts. “Sophia--!” I began. The poor, I thought. “Sweet pea, if you could just move over to the other side and not step on the edge, I’ll be done in just a minute. Thanks so much.” I kept my gaze locked on the spout so that my daughter wouldn’t see my flashing eyes.

There was something strange about the inside of the spout: at the bottom where a hole should have been was merely a perforation of a circle. There was no way for the air to get in! Did the manufacturers make a mistake in cutting the plastic?

Another shot of water in the shorts.

The spiritually poor. “Thanks, sweet girl. Mom’s almost done.” I resisted the urge to shout and send them all inside while I finished, and I grimly hoped that someone would be lifted from the depths of despair and flung up into great consolation by all my efforts. A dim light to stop frowning passed without much notice. I again looked at the troubling spout.

How could I fix the non-hole? I needed something to punch out the perforated circle. I tried using a little wood chip but it broke off inside. I then thought of my parents’ freezer, packed with ice cream, and where an ice pick lay at the bottom. An ice pick, perfect!

Another shot of water, this time in the face. “Augustine!” A mumbled, “Sorry, Mom,” and I knew I was taking the good out of the afternoon. I managed a smile, ruffled the toddler’s hair, and stepped away to get the pick. I returned and after some serious jabs, the spouts were good to go. I resumed blowing and was heartened to see the rainbow puff right up. Yes, I thought.

Out of the corner of my eye, I saw my daughter poised to spray her little brother. Still blowing up the dolphin, I garbled something menacing into the spout in attempt to stop her. Miraculously it did.

She turned, smiled sweetly, and said, “It sounded like you said ‘no’, so I’ll just be over here.” My eyes betrayed my unbelief at her obedience while I kept at the job. For my family, I thought.

With the improved spouts, I was able to fly through the rest of the inflation, all the while wondering if my little offerings were doing anything. As I capped the dolphin, I thought that this must be true faith. If blowing up these little animals is meaningless, my life is meaningless. When I finished, however, my little guys cheered, and I knew that neither was true.

With the lagoon up and running, I was happily down and sitting, and the little guys were playing in the water. Endlessly entertaining was watching the baby crawl up to the stream, touch the spray, shiver, frown, get mad, crawl away, and then return. After a while, she contented herself by watching the bigger kids do the same while she sat in the grass a safe distance away.

I sat in the lawn chair, occasionally swiveling with speed to avoid being sprayed, and admired the plump, straight palm tree and bouncing rainbow. I thanked God again for the chance to serve Him this afternoon. My mom came out to sit with me, and I was happy for her company.

A quiet jingle from behind a hill just past the barbed wire fence in my parents’ backyard caught our attention. I narrowed my eyes and looked toward the sound. A giant wagon pulled by two huge Belgians lumbered up the hill, and a young Amish man with a pitchfork caught the hay that was being pulled up by a series of large belts and flung it into the wagon with him. He must’ve been standing on a pile of hay at least fifteen feet high. It was Andy, my parent’s next door neighbor, and his son.

The wagon passed, they waved cheerfully, and I suddenly felt a little embarrassed by the lagoon, the palm tree swaying in the breeze. I wondered if they thought that it was extravagant. I looked again and decided that they didn’t—or at least they chose not to appear as if they did—as they were still smilingly warmly at my little guys. I also felt lazy—I was just sitting in my lawn chair as I watched them sweat and strain to gather their harvest. I felt the crazy impulse to help them (which, incidentally, they must have felt, too, as they jokingly offered us a pitchfork on their way back). But I decided that they had their work and I had mine, so I waved back warmly, too, and was impressed, humbled, and encouraged by how joyful they were under the burden of strenuous work and humid air.

Perhaps our afternoons hadn’t been so different after all. While theirs had been full of joy amidst back-breaking work and mine had been full of frustration in the face of inflating a dessert lagoon, both had been for Him, I’m sure. Tomorrow I’ll try to do it more cheerfully, following our neighbors’ good example, and I might just be able to if Andy and his son had caught a glimpse of me taking an ice pick to the splash mat and had offered up their afternoon for me.