Would Mary Approve if Jesus got a Tattoo? 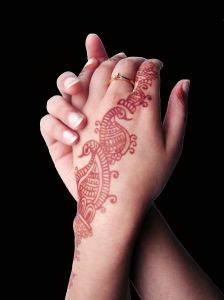 Some days this summer it appeared I was the only parent at the pool without a tattoo. As I swam with the kids I’d notice a heart or college mascot on another mom’s ankle; or Our Lady of Guadalupe or a tribal design on a dad’s arm.

Once upon a time, tattoos were limited to the tough guy population: soldiers, bikers, rock stars. But today it’s a fad that’s affected virtually every age group, race, gender, industry and religion. A Pew Research Center survey found that 36 percent of Americans ages 18–25 have a tattoo, 40 percent of those 26-40, and 10 percent of those 41-64.

I know several people who have tattoos—most who happily sport their body art and a few who regret it. Love or loathe them, perspectives continue to differ regarding their appropriateness and morality, which makes me wonder:

Is it a trend that will continue? Will my kids want tattoos? Am I OK with that? What does the Church say on the subject?

In the article “Physical Graffiti: Tattoo You” (Envoy Magazine, issue 7.4), Deacon Robert Lukosh of Portland indicated tattoos are morally permissible as long as they respect a person’s dignity:

“Body art as a form of adornment, that is ordered to the ultimate good of the person and to humanity, if it observes modesty and avoids vanity, and if it respects the fundamental integrity of the human person—including the integrity of the body—can be morally permissible.”

However some argue that Scripture prohibits tattoos in the Old Testament book of Leviticus: “Do not lacerate your body for the dead, and do not tattoo yourselves. I am the LORD” (Lv 19:28).

“Not exactly,” according to Mark Hart of Life Teen International, who’s affectionately known as the Bible Geek. Hart explained that this verse referred to the ancient mourning practices of the Canaanites that were forbidden for the Israelites. The law was meant to communicate that mourning wasn’t necessary if people believed in God’s salvation. It also sought to prevent people from hurting themselves (tattooing could be deadly back then).

“It’s not altogether correct to say a blanket statement like ‘tattoos are against God’ or are ‘anti-Biblical’ because they’re not,” Hart said, adding that the decision of a tattoo goes beyond what the Bible says about it and should be taken seriously.

Hart said some of the holiest people he knows have ink.

“We have to be able to look beyond the exterior...the saints of today are not going to look like the saints of 200 years ago.”

Perhaps it isn’t only a question of good, bad or if—but why? Why do people want them in the first place?

People get tattoos to memorialize a person; honor a relationship with a child, parent or spouse; commemorate an event or accomplishment; reflect their heritage; express their personality, convey their religious beliefs; and sometimes, to evangelize.

Christopher Baglow, Ph.D., a professor of theology at Notre Dame Seminary in New Orleans, studies postmodern culture and its relationship to Catholicism. His research suggested the tattoo phenomenon is so prevalent because it demonstrates something significant about self-identity in today’s culture:

Baglow said bodily marking is deeply ingrained in the Catholic faith, though in some ways the concept has been lost in the contemporary practice of the faith.

“It’s the reality of love that differentiates the people of the Church and manifests their identity. Let postmodern Catholics get tattoos. Do not discourage their affection for the outward signs of the faith. But also remind them that these signs, without love, are lies.”

In a world filled with colorful tattoos of butterflies and angel wings, Jesus and crosses, Chinese characters, loved ones' names, and anything else you can imagine; it doesn’t appear there’s a black and white judgment.

While I don't relish the idea of permanent ink jabbed into my children's skin, I suppose it’s not the worst thing they could do (subject, of course, to many variables: the image, location and their age and motivation, to name a few)—and it sounds like the Church doesn’t think so either.

SHARE YOUR STORY: Do you have a tattoo? What does it mean? How do you feel about your children having tattoos?

Don't Eat the Dog Food
Read
If You Don't Have a Plan for Lent Yet, Don't Panic
Read
The Church and New Media Book Resources
Read