Confessions of a Wannabe 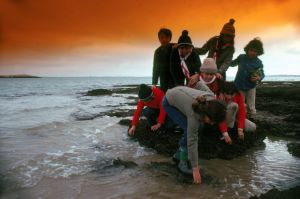 On a recent clear night, I found myself on a country road beneath a stunning canopy of stars.  The sight reminded me of the Boy Scout camp I attended last July, where I spent my days helping my sons’ troop with their merit badge projects, and my nights stargazing.  I enjoyed every moment of that wonderful camp week, and I felt honored to be a part of it.  Maybe it’s because I myself can’t swim, have no directional sense, and don’t know poison ivy from peat moss, but I am filled with admiration for the Boy Scouts of America.

For one thing, they have a splendid motto: “Be prepared.”  It’s a motto that’s relevant, not only to scouts, but to everyone else as well.  The value of preparedness is universally recognized.  So are the consequences of unpreparedness, which are often borne by the mother of The Unprepared.  After all, she’s the one who ends up battling noonday traffic in order to deliver a pair of shorts to a forgetful daughter waiting at the gym, or finds herself kneeling among the petunias at 5:30am, digging up and bagging worms for a son’s early-morning fishing trip.

Of course, we mothers can have our own issues with preparedness, and I’m the most guilty, at least when it comes to menu-planning.  The employees at my local supermarket can attest to this.  They often see me at 5:00pm jet-propelling a shopping cart with two kiddies in tow, frantically scanning the shelves for packages labeled “Ready in minutes!”   Last March, during one of these lighting-strike forays, a grandma noticed that my youngest child, having earlier been whisked away from his Matchbox cars and lashed into his booster seat in 54 seconds flat, wasn’t wearing socks under his sneakers.  “Oh, my!” she exclaimed, addressing Junior as if I weren’t there.  “Your little feet must be so cold!”  It wasn’t easy, but I managed to quash the very unscoutly desire to bean Grandma with a box of Jiffy muffin mix.

I guess I can give myself a little credit for managing to navigate supermarket aisles.  But finding my way to the Hamburger Helper is a pretty puny skill compared to those of your average Boy Scout.  After dark, a scout could find directions simply by locating the North Star, or by looking at the constellations.  On a hot summer day, he could find his way to the ol’ swimmin’ hole by casting stick-shadows.  Or, in the absence of suitable sticks, he could locate south using just his wristwatch and a toothpick.  (I’m not making this up.  It’s on page 115 of the official Boy Scout Handbook.)  I remembered this little fact during a recent errand-that-became-a-road-trip, in which I was making my way back to Bethlehem, PA from Trenton, New Jersey.  Somehow I took a 64-mile detour and ended up driving through the heart of Philadelphia with a quarter tank of gas and a headache.  All the while I was desperately wishing to be the object of a Good Turn by a corn cob-gnawing scout wearing a Timex.

Clearly, I don’t have what it takes to be a Boy Scout. And even if I could tie a sheepshank knot with my toes and bugle Reveille with my hands tied, there’d be no getting around the fact that I’m too old and too female to join the hallowed ranks of the Boy Scout Association.   But at least I get to look on in admiration while, as members of Troop 311, three of my five sons learn to use fuzz sticks, identify animal tracks, scale crags, and pulverize clay birds.