I know…I know. I’m a little late to the party with this review, but I’m very happy to report that I finally finished the single player campaign a couple weeks ago. So…what does that mean? It means it makes me totally qualified to comment on the game. Yes. I’m an SC2 expert (…really…is laughing necessary?…) who is ready to inform you of why you really need toget this game immediately…ESPECIALLY if you’re new to gaming and/or the RTS (Real Time Strategy) genre. Don’t even read the review. Just go and get it.

StarCraft 2, as the name suggests, is the sequel to Blizzard Entertainments massive RTS hit StarCraft. The original StartCraft was released waaaay back in 1998 and has (…was???…) become one of the biggest and most popular RTS games in history. This is especially true in South Korea where it enjoys a sport-like status among gamers in that part of the world. I’m not joking…StarCraft is HUGE in South Korea and it’s looking like SC2 is starting to get the same kind of status. Released last July, StarCraft II: Wings of Liberty, has reportedly sold around 5 million units since December of 2010. To put that into perspective, the original StarCraft sold about 10 million over 10 years from its release date. So…yeah…big numbers. Big expectations. Big money. When I say “Big Money”, I don’t mean just for Blizzard. Going back to Korea for a second and for the benefit of my uninformed readers out there, StarCraft is an “e-sport” (…I said stop laughing…), which means people play this game professionally. Don’t scoff at the concept. Some of these players can make well into the six figures…yearly…playing this game at a professional level. 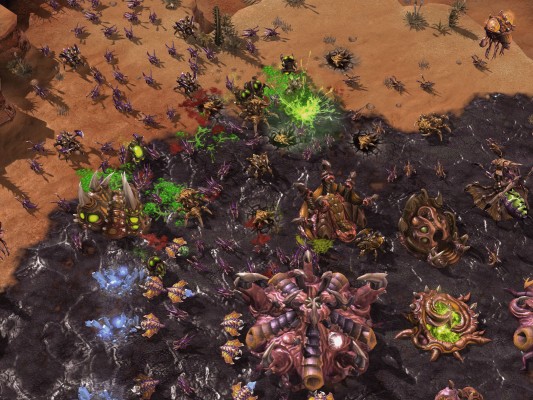 So. What does this mean for you? It means that if you’re going to pick this up as your first RTS, you can at least know that there is a very strong community out there to draw upon when/if you start to compete head to head with other players. I’m getting a bit ahead of myself, because I want to talk about the single player aspect of the game first. When you first start up the game, you’re going to notice that the it is split into two basic parts: single player and multiplayer. In the single player game, you can play the tutorial, play the campaign, play “challenges”, or play a skirmish against the computer. For newer players, I highly recommend the tutorial…for obvious reasons. The tutorial will help you with aspects such as the UI, moving units, and various other areas of the game or play mechanics that are new to you. After all of that, I think you should just jump into the campaign because that is really where the fun begins for single player. The campaign is a fun string of maps put together by Blizzard and loosely held together by a story. I say “loosely” because…well…the story really is not that good. It’s serviceable, but to say that you should get SC2 “for the story” would just be a lie. The story is the typical “boy gets girl out in the old west” kind of deal. The hero (Jim Ryanor), lost his love in one of the battles with the Zerg. Well, she really wasn’t lost, more turned into a monstrosity called “The Queen of Blades”. Sure, Raynor is also leading a resistance movement against an evil dictator…but really…he wants his girl back and it’s just super convenient that he’ll need to take down the bad guy in order to get her back. Here’s a nice thing to know: fans of Firefly will love the setting of SC2′s story. Nuff said. Anyway…as you go through this story (Terran side only), you’ll be slowly introduced to more powerful units and more challenging tasks to take on. In a way, the first couple of missions of the campaign are extensions of the tutorial, so the transition between learning the game and playing the game are very well done. For those familiar with World of Warcraft,  Blizzard has masterfully integrated it’s achievement system into SC2. So, for those achievement junkies (…of which I am not…) you will find yourselves with plenty to do, even after you finish the single player campaign. Speaking of achievements, the challenge mode is all about getting achievements. The challenge mode is a set scenarios in which you try to complete a task given a certain set of parameters. The game will give you “gold”, “silver” or “bronze” achievements depending on what parameters you meet. There in lies the challenge as some of the “gold” goals are quite lofty…well… for this gamer at least. 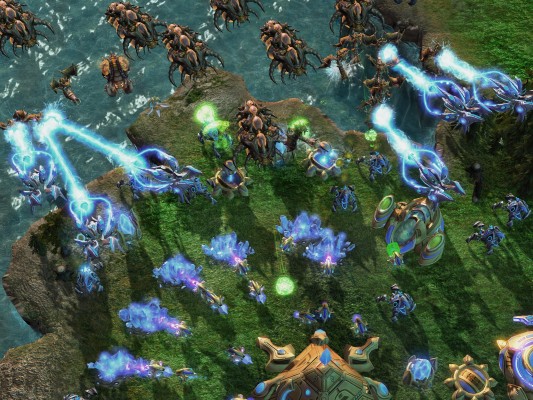 Onto the multiplayer part of SC2. Now, I must admit, I fear SC2 multiplayer….so this part of the review will be colored with my SC2 multiplayer anxiety. Let me explain myself a bit. I don’t fear multiplayer in the general sense. I LOVE first person shooter multiplayer. Right now, I’m really liking League of Legends (…another review that will probably show up here…). It’s something about the way SC2 works that gets my stomach up in a knot when that countdown clock starts. My build order gets screwed up, I panic and I lock right up. No idea why…it just happens. That all being said, I LOVE watching SC2 tournament replays. Watching guys like Day9 just bring me all sorts of joy. SC2…for me…is the opposite of how I view baseball: fun to play, boring to watch. Man….baseball is boooring to watch

. SC2 mutliplayer is done in a variety of ways, but the biggest part of it is laddering. You’re matched to another player by some Blizzard voodoo (…I’m sure it’s voodoo…) in either a 1v1, 2v2 or 3v3 or 4v4 game and then you go at it. Those that win, move up the ladder. Those that loose, do not; however, they do get some kind of weighting added to ensure that they are matched up to an “easier” player next time around…or so I hear. If you start winning a lot, you will start to find yourself moving up to more challenging leagues. In my opinion…multiplayer in SC2 is not for the feint of heart. It involves timing, practice and good reflexes. If you have any of those, then you’ll be good to go. Who knows, if you get really good maybe you’ll find yourself in Korea winning billions of dollars.

Wrapping this all up, cause I think I’ve talked your ear off enough. You need to get this game if you are looking to get into gaming or in to RTS gaming. This game would also be very fun for the kids if that is what you’re looking for…but like anything, you need to be careful cause one can pour a lot of time in getting good in multiplayer SC2 when one should be doing one’s math homework. StarCraft 2 is a Highly recommended game with the expected Blizzard quality just oozing from every pore. Of course, there are two more installments coming in the near future, so you know that this game will be around for a while to come.