On the Ravages of Abortion 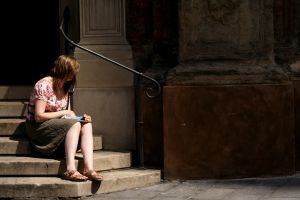 Last week, we had our good friend Fr. Matthew over for dinner.  As we were talking about our summers, Father, who’s long been involved in pro-life work, including counselling women who’ve had abortions, mentioned that he had recently returned from another successful Rachel’s Vineyard retreat weekend, expressing joy in his role of having heard confessions during the retreat.  Later, over email, Father graciously agreed to share his experience of how he’s seen first-hand how abortion traumatizes women.

The deleterious effects of abortion on women, Fr. Matthew writes, are “deep and very pervasive”, making the healing process a lengthy one, if not life-long.  Emotionally, he begins, a woman who’s had an abortion often no longer experiences “any sense of peace or stability, but a nauseating roller-coaster ride of emotions, usually dark and heavy.”  She feels “deep shame, deep regret, deep humiliation, and even, often enough, deep despair without any glimmer of hope”, which can be intensified if she has had a dark past of broken homes, a lack of faith and morals, or addiction.  Many post-abortive women, writes Father, “have never known true love, and therefore, don't know what it looks like or feels like.”

Psychologically, writes Fr. Matthew, a post-abortive woman typically experiences an “embedded conflict”, where she lives one way publically and another way in private, as she seeks, consciously or not, to drown the pain caused by the abortion.  Sometimes she fails to connect this internal struggle with the abortion and attempts to resolve the tumultuous emotions and behavior through costly and mostly ineffective medical or psychological consultations or by other remedies.  A post-abortive woman often deeply feels the sense that she can no longer do any good after having made such a decision.  She can be imprisoned by lies, feeling that she will be condemned if she shares her secret or feeling as though she can’t ask for help because it either doesn’t exist or she doesn’t deserve it.  Depression and suicidal tendencies are “extremely” common for these women.  And the psychological effects can even be felt by any other children that they might have, as the children can somehow sense that a sibling is missing and feel conflicted about why their lives have been spared.

Physically, Fr. Matthew writes, “there is great pain, physical reactions, nightmares, sweats, and tremors”, especially if her sense of connection to the abortion has been triggered by events such as seeing a child who is the same age as the aborted child, hearing a meaningful song, or even on the anniversary of the date of the abortion or due date.  She often has nightmares about babies dying or about her suffocating which are “very horrific”.

Finally, the most common spiritual effect of abortion is despair.  The post-abortive woman often feels that she has committed the unforgiveable sin or tells herself that she simply doesn’t deserve to be forgiven.  She may avoid church, feeling as though she no longer belongs there, or if she attends Mass, will exclude herself from communion, even if she has confessed the sin of abortion in the sacrament of Penance.  “There is a great sense of unworthiness and even despair for one's soul.”

For more on the effects of abortion, Fr. Matthew recommends viewing the following video from the Silent No More Awareness campaign: http://www.silentnomoreawareness.org/articles/article.aspx?articleid=85&owner=0.  The site also has a very powerful video on its home page.

Interestingly, a new comprehensive study on the ill-effects of abortion on women’s mental health has come out just a few days ago, http://www.lifesitenews.com/news/largest-ever-study-finds-abortion-increases-risk-of-severe-mental-health-pr?utm_source=feedburner&utm_medium=feed&utm_campaign=Feed%3A+LifesitenewscomLatestHeadlines+%28LifeSiteNews.com+Latest+Headlines%29.  The study shows, among other things, that abortion increases the rate of serious mental health problems in women by 81%.

As Catholics, though, we believe in life after death, in the Resurrection after the Passion.  With our hearts firmly rooted in the belief of an all-merciful God, next week’s post will continue with Father’s correspondence on abortion, this time telling of the powerful transformations he’s seen through programs such as Rachel’s Vineyard and through the sacrament of confession. He will conclude with a powerful reflection on the immense mercy of God.

“Our sins are nothing but a grain of sand alongside the great mountain of the mercy of God.” -- St. John Vianney