Mousetraps and the Case for Intelligent Design 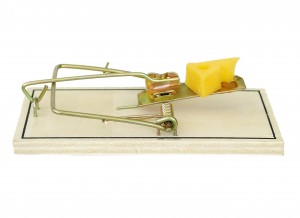 I’m no scientist, but I have a high regard for science. Which is why I found a websitehighlighting a group of scientists making the case for Intelligent Design so fascinating.

Let me say this upfront: my faith doesn’t require such evidence. But such evidence certainly doesn’t hurt my faith. It enhances it and excites me, because I know that through it, others who depend on such evidence for belief have more of a chance to know and believe in the One who is waiting to love them.

In one instance on this website, a mousetrap is used to explain what is a fairly complex theory known as irreducible complexity; a theory that presents a severe challenge to gradual step-by-step evolution. The theory doesn’t disprove that things evolve, but shows that certain systems could not have evolved, that they had to have come forth by way of a designer.

For example, a mousetrap comprises five main parts. Each of those parts is required in order for the trap to work. If one of the parts is missing, the mouse gets away. In other words, the mousetrap could not have evolved step by step because all parts had to be in place from the get-go in order for it to ever have worked. This indicates that a designer was involved in the construction of a mousetrap. The human knee is another example.

To explain this concept, in this video clip,biochemist Michael Behe uses the construction of a flagellar motor – a complex molecular machine that propels bacteria through liquid. This required magnification of a cell to 50 million times its true size; something that was impossible back in Darwin’s day. This magnification shows an intricate system that demonstrates irreducible complexity.

For evolution to be possible, one must explain how systems came into being step by step. But with irreducible complexity, no function was possible until all parts were in place. Thus, evolution cannot account for its existence.

I hope I’m explaining this correctly and that it’s making sense to you. To me, all of this points to compelling and fascinating evidence of a Master Designer.

God designed science, too, to help us as human beings better understand our world — what it comprises, how it is ordered, how things fit together. He wanted us to understand. But the more we have been able to accomplish through our knowledge, the more our pride has gotten in the way. Knowledge is a beautiful and wonderful thing, but with it comes a temptation to disregard the Creator who put it all into motion in the first place. (We’re back to the Garden of Eden…)

It seems to me that even as we human beings move into a more complex understanding of science, God is simultaneously revealing more and more of who He is. We are going to keep bumping into God in all realms of our intellectual pursuits…eventually. Certainly, some things can be explained, to a point, without recognition of the supernatural. But only to a point. Going beyond that point leads us back to the reality, the absolute necessity, of a Prime Mover.

Why would we be satisfied with going only halfway when the whole way is at our disposal?

Intelligent Design makes sense. I can know this without scientific evidence through my reasoning capacities. But having evidence adds depth and meaning to the quest for full knowledge.

Q4U: What evidence do you require for faith? Where do you seek it?