Exaltation of the Holy Cross 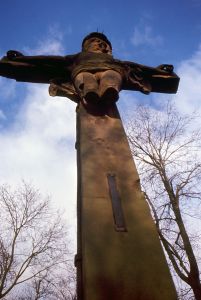 “O Jesus, keep me under the standard of your Cross.”

This quote was made by St. Bernadette, the poor and ignorant child of Lourdes.  Yet, for such an uneducated mind, she managed to produce a sentence layered with profound meanings.

We are familiar with the multiple meanings of Christ’s Cross.  The cross is a symbol of suffering and punishment, but it is also a symbol of a great and triumphant victory.  And just as the cross itself has multiple meanings, so does the word “standard”.  In fact, according to my dictionary, there are approximately 19 different meanings or sub-meanings of the word standard.  But fear not, I will only focus on a few.

Standard:  A pedestal, stand or base.  In its most literal sense, St. Bernadette probably meant to keep her under the physical standard of His cross.  She prayed that He keep her close to His Cross, always.  She wanted the perseverance to remain near Him, even in His suffering when so many others had run away.  This prayer asks that she be counted among the few who remained unafraid and willing to suffer along with Him as He completed the Paschal Mystery.  This level of perseverance in the faith is difficult to attain, as the other eleven disciples have shown us.

Standard:  A flag, banner or ensign.  Wow.  The American flag is overflowing with meaning and it is an honor and privilege to stand beneath it – to say, “I love my country and believe in all that it was intended to be!”  It is so much more powerful to stand beneath the Cross to proclaim your belief in all it stands for.  This standard is raised to indicate the rallying point for soldiers in battle.  As St. Joan of Arc rode into battle beneath the flag of our Lord, Our Lady and her country, so we must remain beneath the Cross as we ride into spiritual battle each day.

Standard: A level of requirement, excellence or attainment.  We are called to live a life of the Cross – a feat no mere human can do on his own.  We all need the grace of God to keep us at the Cross, continually offering up our sufferings and frustrations.  In this case, the Cross is a constant reminder to us to strive to be like Christ, even unto the Cross.

On the feast day of the Exultation of the Cross, explore ways your family can place themselves under its standard.

- Explore together what our faith teaches about the Cross.  What does it mean to pick up our cross and follow Christ?  Make a list of the crosses in the lives of your family members.  A miserable job, a long term illness, an unkind schoolmate, that strange smell in the car.  Anything that causes a family member irritation or complete misery is a cross.  Then brainstorm ways of changing those crosses into a source of sanctification and a chance to grow in virtue.  Thank God for these crosses and ask for whatever you need to help you carry your burden.

- We are members of the Church Militant, fighting a spiritual battle every day.  Build pride in your family and your faith by creating a family crest.  Using the cross as the main feature, embellish it with symbols of the faith and of virtues and talents your family members have contributed to the Church Militant as a whole.  If you pray the Rosary nightly, include a Rosary on the crest.  If someone sings in the church choir, include a musical note on the crest.  Make it something that shows how your family gathers together under the Cross to fight the good fight.

- Discuss the phrases “They have high standards for their children,” and “Why don’t you lower your standards?”  How do these apply to the Cross as a standard?  When a standard is set high, it can be seen from far off and is a constant reminder of what each family member should be striving for.  But if it is lowered, there is no moral compass in sight and family members will begin to stray.  Therefore, raise the Cross high upon that hill as the standard to which everyone in your family should strive for.

St. Bernadette’s words, inspired by the Holy Spirit, remind us of what an honor, duty and privilege it is to venerate and embrace the Cross – not just on the feast day of the Exultation of the Cross, but each and everyday.

O Jesus, keep us all under the standard of your Cross.