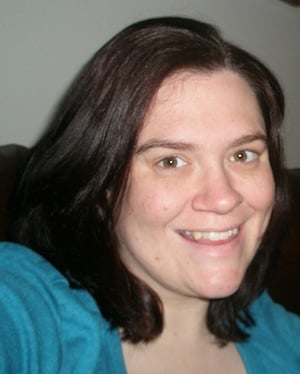 Editor's Note: Today, we welcome new contributor Holly Rutchik to the CatholicMom.com family of writers. Holly's blog at http://fallingupwardholly.blogspot.com/ is full of her wonderful brand of inspirational writing and I'm thrilled that she'll be joining us here regularly to share her words and her family with us. Welcome Holly! LMH

This past weekend marked our fifth wedding anniversary.

Five years ago we married, and then canceled our honeymoon to Rome. Instead, our “honeymoon” was spent in the hospital. My husband had his first heart surgery a week into our marriage.

I wasn’t too fazed by the canceled honeymoon. There were bigger issues at hand, clearly. Plus, we’re dreamers. It’s how the Holy Spirit drew us together to begin with.

So, as young love goes, naive promises were made as we held hands in an ICU and glanced into our future to get through our rough present.

On our fifth anniversary there’d be a vacation, a ring upgrade, a new dress. Maybe even a little one to shuffle off to grandma and grandpa’s house before heading off to somewhere luxurious.

And here we are. Five years, a job loss, four moves, another heart surgery, three kids, a miscarriage, a graduate degree, a broken leg and two broken mini-vans later.

You may be surprised, but I’m not writing this from an island resort.

I woke up this morning to find two toddlers had crawled into our bed, and my husband had crawled out. He had stayed up late working, gotten up in the middle of the night with the baby, and was zonked out on the couch.

There’s defiantly not a vacation anywhere in our near future and I’m fairly certain my wedding ring is chipped. We’ll have to put that on the list of things to look into.

The real life version of our ocean-view five year anniversary was an afternoon in the backyard. The kids were in swimsuits and daddy was playing with the settings on the hose sprayer. Our daughters shrieked in delight and scurried back and forth between daddy and the fence. Chubby toddler toes on wet grass is close to perfection - until it’s time to come in the house.

I watched this weekend from the lawn chair as I fed the baby. I certainly wasn’t wearing a new dress. The shorts and tank top I had on were on their third day of wear, and covered in baby-spit up.

Thoughts of vacations were pushed from my mind as I returned to reality and added “make sure rug is out before letting the girls back inside” to my mental “to –do” list. I returned to my daydream and began fanaticizing about purchasing a washer and dryer. We’ll have to put that on the list of things to look into.

Anniversary gifts haven’t been exchanged yet – mostly because the checkbook hasn’t been balanced for the month and we don’t like to make extra purchases until we’ve got the month figured out. We’ll have to add the banking and budget to the list of things to do before Monday.

Once the little ones were hosed off, we headed in-doors to make heart cupcakes. Fingers were dipped, an egg shell was dug out of the garbage and licked and pink sprinkles tumbled across my newly-cleaned kitchen floors. The big girls decorated cupcakes and sang “happy birthday” to mama and daddy’s marriage.

The weekend was nothing extraordinary.

There are big decisions being made over here this weekend. There are career opportunities to be weighed, new schedules to be sorted out.

At first, the dreamer in me was slightly disappointed. But then I followed the dripping sound coming from the bathroom to find three pint sized ruffled swimsuits hanging from the showerhead to dry.

I recalled my dream of married life and motherhood is much older than my dream of a fancy five year anniversary trip.

I adjusted the bathmat to catch the wet droplets of a simple, joy-filled afternoon and returned to the sun-kissed cheeks of my “Irish twins” who were sitting cross-legged on my kitchen counter.

They both wore frosting-covered grins because to them, playing in the backyard with mama and daddy and eating cupcakes in the same day is living in a fantasy.

We canceled the babysitter we had lined up for an anniversary dinner out. We got news of a fire we’ll have to put out and my husband has too much work to do. An evening out this particular weekend would have led to no sleep for him and too much stress on the both of us this week. It was hard to do, and not ideal. There is far too much “working” around here. Something we’ll have to look into in the next five years.

I dreamt of going on a cruise for our ten-year as my husband and I spent the evening talking about a big problem that we’ll have to face this week.

I remind myself the only cruise I’d be going on in the near future is bound to have Mickey Mouse captioning the ship.

I guess we’ll bring that dream back to reality during the romantic budget meeting we’ll have tonight.

Everyone is peacefully sleeping now as I reflect on the anniversary weekend. My husband will get up early to work and the baby will wake to take her medicine soon. I’ll have to add refilling her prescriptions to the list of things to look into this week.

For the first time today the only sound in my home is the ticking of the clock. It reminds me although I’m slightly disappointed that time, finances and a full plate didn’t allow for the anniversary celebration I had planned, I’ll never wish these hard days away. In fact, I desperately grasp every stress-filled minute for fear they’re too quickly slipping away.

Maybe by our ten year anniversary we’ll be vacationing. Just because we didn’t get there in these five years doesn’t mean we won’t in the next. We’re dreamers after all.

You are (in jest) “the love and demise of my life.” You truly do sanctify me.

"Enjoy the little things, for one day you may look back and realize they were the big things." --Robert Brault