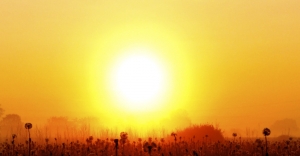 It’s the first day of school here at the Fenelon Clan Abode, and I made our high school sophomore a super-duper, extra-special, sunshine theme breakfast: Eggs in a basket with little mini-sun cutouts, sunshine drink (milk with vanilla, sweetener, and yellow food coloring), and yogurt parfait with bursting sun rays (peach slices arranged along the edge of the glass).

I set everything out just right, so proud of my handiwork. I even gave our son a little hug and a sweet peck on the cheek. And what did I get in return? A sigh and a pair of rolling eyes. Alas, I do believe that my traditional first-day-of-school breakfasts are losing their charm! But…I just don’t understand. What 15-year-old wouldn’t want little suns staring up at him from his breakfast plate?

By now you realize it was a joke – both the sunshine theme and the eye rolling on the part of our son. I really did make those things, but it was just to tease him about having to get up early today after a summer of, well, summer schedule. If I hadn’t had a radio gig this morning, I wouldn’t have wanted to get up early, either! Of course, having been up already for three hours and downed four cups of coffee perked my imagination (Fine. It was six cups). But I would have done something special anyway.

The start of the new school year is important for more than academic reasons. It signals a fresh start, a new beginning. It also is a reminder that we’re growing and developing – even those of us who are no longer in school. How many of us get the urge to go shopping for new clothes, books, or office supplies at this time of year? That’s because it’s ingrained into us that September (or late August for some) means change. The air is cooler, the leaves will soon turn color, even the paths of the sun and moon are different.

This is reason to both look back – how did we do last year? – and ahead – how would we like to do this year? We all can and should be doing that; we need to stop from time to time in order to access where we’ve been and where we’re going. Are we progressing intellectually? Emotionally? Spiritually? Often, we’re so snarled in the same old grind that it doesn’t seem like we’re moving ahead at all. But, we are, and we should take time to make note of that.

Before each important step in his life, our Lord took time out. For example, he spent 40 days in the desert before being baptized by John the Baptist and beginning his public ministry (Mt 4:1). He went up the mountain and prayed the entire night before choosing his apostles (Lu 6:12), and he withdrew to Gethsemane after the Last Supper to pray as he awaited the arrival of the soldiers to arrest him (Mt 26:36). If Jesus took time for meditation and contemplation before moving ahead, then shouldn’t we?

The school year is starting, and that’s cause for reflection and celebration, whether it’s a serious or frivolous one. The sunshine may be getting older around here, but it still heralds the start of something new and exciting.