Editor's note: This Advent season, we are blessed to have a series of beautiful reflections by our own Marge Fenelon. For more spiritual support and encouragement, please check out Marge's beautiful book Imitating Mary as the perfect gift for yourself or a loved one this holiday season! LMH 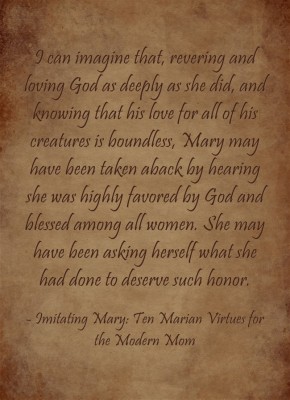 What if you were working quietly at home, when suddenly an Angel appeared before you? How would you react? If an Angel ever appeared to me, I'm not sure who would be more surprised: me, or the Angel! I think I would not only jump out of my seat, but under it I'd huddle, shivering, until some nice person came along to assure me I’d not gone mad.

Mary's response was far more calm than I think mine would have been. As far as we can tell from Scripture, Mary may have been surprised – even a bit fearful – but she wasn't terrified. Her actions and response were quite deliberate; she stayed in her place, open-mindfully listening to what the Angel Gabriel had to say.

I would describe Mary's demeanor as calm-wonder. Luke wrote that Mary was "troubled" at the Angel's message, but she wasn't distressed. It seems she was troubled because she didn't understand Gabriel's words. How could she, a Virgin, conceive and bear a Son?

When we face these times, we can think of Mary and how she faced the messenger in her life and the confusing message he brought to her. She didn't refute what he had to say. She didn't ask him to retract his words. She didn't demand to know why she was being asked to accept such an awesome responsibility.

No, she asked only one humble question: "How?" How was God's will to be fulfilled in her life when, humanly speaking, it appeared to be impossible?

There may be many situations in our lives right now that seem impossible. Like Mary, we should strive to react to them in the calm-wonder. Instead of immediately flying off the handle because we think it's too much, or unfair, or nonsensical, we need to pause, calm ourselves down, and wait for God's message to sink in. We need to put aside the why, the what-four, and the I-don't-want-to. Then we need worry about only one thing: opening our hearts to the wonder of how God will accomplish what he is asking of us. Like Mary, we need to constantly remember that the All-Powerful God is in control, not us.

Mary was a Widow
Read
Tech Talk: What Would Be on Mary's iPad?
Read
The Martyrs Project: What Would You Die For?
Read