Many Are Called: Catholic Manga Review 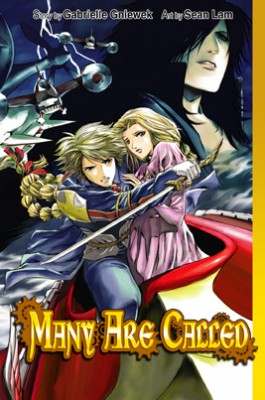 A compelling plot line, characters you care about, visual pictures that paint themselves in your head as the story plays out, and -- best of all -- a moral...

Jesus' parables had them all. He used parables in his day to portray timeless truths in a fashion that could be understood and embraced by his followers. Time and time again in the gospels, we find him preaching through parables, and for many of us these simple tales hold the truths to which we have devoted our lives.

So it feels fitting that Manga Hero, the amazing creators of the wildly popular Habemus Papam, would turn to parables for it's latest title Many Are Called. Here's the blueprint:

The palace is astir, preparing for the long-awaited wedding of its beloved Prince, who leaves the safety of the kingdom borders to fetch his bride, now missing in exile for 7 years. But the Prince isn’t the only one searching for the lost princess. Lord Richter, and his army of Raiders, scours the countryside for her, turning the noblemen of the land against their King in the process. With old and new enemies before him, and disorder among his own ranks behind him, the Prince must overcome all obstacles to find his betrothed before Richter does, and bring her safely back home. Though whether the bride wants to return to the very place she fled from is an entirely different story. A past will be revealed, a score will be settled, and a future will be formed, all before the night is over.

The action takes place in a dual context with the biblical evangelist Matthew and the "Sons of Thunder" present while Jesus  is preaching the parables, interspersed with a an action oriented plot line that is in every way a modern retelling of the parables themselves. Since I'm a mom, and a newcomer to Manga, I'll admit that it took me two reads through the story to see this spiritual connection come full circle. Along the way, I found the characters gripping, the action riveting, and the artwork amazing.

Many Are Called is appropriate for ages nine and up since there are a few very fleeting references that may not be appropriate for very young readers. In every sense, this is a story of faith and of redemption, inspired by the greatest stories ever told. I am anxiously awaiting the next release from Manga Hero and am happy to give Many Are Called a strong recommendation.