What Not to Wear if You Want to Show Respect 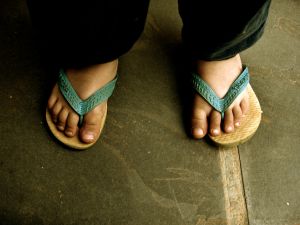 It has been my rant for many years now about what folks wear to Mass on Sundays....or any other Mass during the week.  From Altar servers in cargo shorts and t-shirts to mohawks and running gear as Eucharistic Ministers, I stand appalled on a regular basis.  Chewing gum and texting during Mass gets me wondering,  "Where are these people spiritually?  Why are they here: Coercion, habit, or lukewarm mentality?

When these are kids, I just have to blame the adults in their lives for not encouraging them to understand what the Mass is and why it is an amazing and spiritually rejuvenating sacrament in which we participate, celebrate, and share with the community.

Just yesterday, I was talking with my friend at a volleyball scrimmage our daughters were in.  We have a new volleyball coach and our first game is tonight.  She leaned over and asked me, "What do you think she gonna wear to the game?"  Hm, our first volleyball coach wore a tie and dress pants to the games consistently.  Our girls respected him and there were no slackers at the games.  It showed us that he took his job seriously, during the practices, he wore athletic pants, team t-shirt, but at the games, he put on his professional look.

Always thinking of a good analogy for how to dress for Mass, this scenario has a parallel to the youth groups,  their leaders, AND parents, too.  Doesn't it make sense that as we prepare our youth for Christ and meeting Him in the sacraments that when it's time to attend Mass, we should show up in a tie (or the female equivalent) for the same reason this young volleyball coach does?