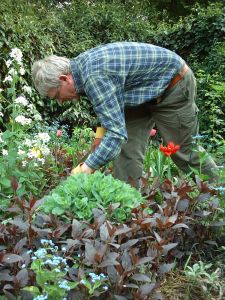 Once upon a time there was a beautiful thriving garden on a small lot in the middle of a busy metropolitan area; people would come from all over to see the riotous flowers of every variety and color spilling onto the paths.  Vegetables grew as high as the average man; there were trees of every species:  pear and apple, orange and lemon.  Often visitors would be so moved they would leave money on the wall to thank the owner for allowing them a few moments in this garden oasis so full of peace and beauty.  The gardener depended on these donations to pay for the upkeep.

The gardener did not have much time to speak with the many who came in and out of the grounds each day.  So busy was he tending and pruning, gently singing and shaping the various plants and flora.  The abundance was often overwhelming, the soft rain would come and the sun would shine and the beauty of this place was otherworldly.  Folks came to bask in the majesty of the garden; an afternoon spent there was as good as a weekend away.  World-weary spirits were renewed after escaping to this lovely refuge from the city.  For a long time, the gardener was extremely satisfied with all his hard work, he felt that his efforts were rewarded and things were exactly as he intended.

One day he noticed a small tree in the back corner of the garden that did not grow as lovely as the rest.  He began to hoe the ground around the tree, feed it and give it extra attention.  He sung to the tree and pruned it and loved it, but it just wasn’t responding the way he wanted it to.  It seemed to give the gardener a hard time.  The tree was meager and sparse with bare and crooked branches.  He thought to tear it from the ground, but felt he had put in so much time, he couldn’t just give up now.  It was small and bent over and refused to respond to all his best labors to improve it.  The gardener began to get angry and resentful, this one small spot in the garden he felt ruined the look of the rest.  Soon he found himself spending all his time on the small, stooped shrub.

Sightseers still came and marveled and said to each other how proud and talented the gardener must be.  Their joy overflowed and they felt serene and at peace in this sanctuary in the midst of the metropolis.  Somehow, as the days passed, the gardener began to spend more and more time with the difficult unbending tree.  Soon the flowers in other parts of the garden began to wilt just a little and the vegetables began to droop.  People still came, but not as many as before.  Leaves began to lay in small piles upon the paths, deadheads were not removed and vegetables hung heavy on the vines as the obsessive gardener neglected other parts of the garden.  One day, he completely forgot to water the grass, so intent was he, high in the branches of the heartbreaking tree.  Overnight brown patches appeared on the formerly immaculate lawn.  In the morning, the gardener made straight for the wayward tree and never noticed the flaws in the usually lush carpet of grass.

A young family, who had brought their friends to see the magnificent park, frowned in consternation at the condition of the once pristine grounds.  They murmured amongst themselves.  Somehow it had begun to look a bit shabby and dare they say it even derelict in some spots.  Visitors, who previously were admonished to tread carefully on the lovingly placed flagstones, now trampled wherever they pleased and sometimes left the remains of picnics on the grass.

None of this seemed to penetrate the gardener’s consciousness.  This garden was his family, his baby.  The old man had dedicated his life to it and now he could only saw the flaw in the beauty and obsess over it.   His present actions began to destroy the entirety of what had once been magnificence.

One day the taxes were due and visitors had dwindled to a few people on their lunch hour in search of a place to sit down.  The donations were not enough to pay them.  The gardener slightly aware raised his head from his work long enough to acknowledge his lack of money.
“Oh well”.  Still he fevered on cutting and pruning, feeding and mulching the annoying old shrub.

On a late fall morning when the gardener arrived at the garden there was a large padlock on the gate.  He stared beyond the fence through eyes that could not see.  As the tax men came to escort him away, finally it dawned on the old fellow that the thing he loved most in the world was lost.  His beautiful garden, his pride and joy was not taken away, he had thrust it away with both hands.

As he took one last glance over what was left of his holdings, his eye caught sight of the disfigured old oak.  What struck the gardener most from this distance was that the ancient tree had a beauty and elegance he had never noticed.  With his head bowed, the gardener turned and wept as he was led away.