The Discomfort of Zelie 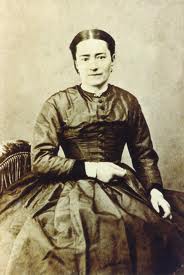 It was a slow, cold wave rolling over my tummy and trickling into my toes.  As I read page after page of the endless tasks in Blessed Zelie Martin’s life in The Mother of the Little Flower by Celine Martin, TAN Books, from her exacting work in the lace business, to the daily tasks of running a household, her diligent prayer life, and constant efforts to relieve the poor and suffering around her, I felt the air escaping from my lungs like a punctured bike tire.  Chilled all over, I gripped my coffee cup and stared unblinkingly at the pages. It was clear: Zelie had made herself uncomfortable for Christ every day.  And far from easing her burden, He had allowed her to continue in her endless toil, which was finally ended by a brutally painful bout of breast cancer.

I suddenly didn’t want to want to be at Starbucks.  I looked at my coffee with a mix of love and contempt.  Zelie’s example had proven the point: it’s impossible to be comfortably holy, which, upon two seconds’ reflection, I realized had been the sole aim of my spiritual life.  How many times during the day did I ask myself—knowingly or not—just how little do I have to do to keep myself in sanctifying grace?

Oh, man, this was bad.  Very bad.  I suspected this would begin a new, more difficult chapter in my life.  And if I did it right, it wouldn’t get any easier, and it might just result in a slow, painful death.  Yikes.  I rubbed my temples in distress, and a few people glanced at me, puzzled.

Jesus was inviting me to wear myself out for Him as Zelie had, to reserve nothing for myself, to run on all cylinders, not for comfort but out of love for Him.  Could I do it?  Would I?  The full implication of His invitation was quickly adding up in my mind as I thought about all the suffering Zelie had experienced while on this earth.  She, however, was not concerned about the cost of loving Him, which undoubtedly led St. Therese to write later, “True love doesn’t calculate.”  Indeed, Celine shows time and again that her mother simply offered herself to Jesus, day in and day out, keeping nothing from Him:

Celine writes that her mother Zelie was “activity personified”, writing, “She was constantly busy with her lace-making, housekeeping, working for her children, and her correspondence.  Father endeavored as far as he could to relieve her, persuading her to accept helpers.  But she never thought of herself—she forgot herself entirely.  Her former housemaid, Louise, wrote to the Carmel many long years afterwards, ‘How many details have come to my mind since her death!  For herself, anything was good enough, but for others, it was quite the reverse!’”

Celine recalls, “I myself can still remember her distinctly, preparing every morning an excellent breakfast for all in the house; whereas she was satisfied to snatch a little soup for herself which she swallowed hastily, as she was going about.”

“Always the last to retire, around 11 p.m., she often rose at 5:30 a.m.,” writes Celine, so that she and Louis could attend the early morning Mass together daily.

Regarding fasting and mortification Celine writes, “Despite her poor opinion of herself, however, she led a very mortified life, and was rigorously faithful to the laws of fasting and abstinence (which were then much more strict than they are now), perhaps even to the detriment of her health and observed them even in her last illness.”

Zelie once wrote, “We are in the full period of penance.  Fortunately, it will soon be over, for I suffer so much from fasting and abstinence.  It is not, however, such a hard mortification, but I feel my stomach so weak, and especially I feels so cowardly that if I listened to myself, I would not want to do anything at all.”

Regarding her lace business Zelie wrote, “My poor Marie feels the whole situation very much also.  She has not a good word for the Point d’Alencon.  She repeats that she would rather live in an attic than to earn her living at what it costs me.  I admit that she is not wrong.  If I were free and alone, and if I had to go through all I have suffered for the past 25 years, I would prefer to starve; the very thought of it gives me the ‘creeps’.”

And, “I often say that if I endeavored half of all this in order to gain Heaven, I would be a canonizable saint!  I think of my brother, also; if he has the same worries as I, I pity him with all my heart, for I know well what is the price per yard.”

On Zelie’s immense charity Celine writes, “She preferred to exercise charity in the most direct, immediate way; that is, to give daily help to those who seemed to be in need around her, and her faith made her think first of all of souls.  Hence she urged us to pray for sinners, for those in the neighborhood who were in danger of death.  These she visited, and helped materially, if they needed it; she would tactfully direct their thoughts to God, and call in the priest when there was need of the last Sacraments.  Her letters contain many instances of this spiritual form of charity.”

Louise testified, “I alone know how many two franc pieces (of money) as well as the many dishes of stew she sent through me to poor persons around Alencon.”

And Celine, “I frequently saw [the poor] coming to the house and receiving food and clothing.  Mother often shed tears when she heard their tales of distress.”

I stopped reading.  What a beautiful life.  I fantasized about what Jesus could do through me if I stopped cutting corners, stopped giving up when the going got tough, and stopped calculating the cost of loving Him.  What could He do through me if I kept loving Him even when it was no longer comfortable to do so?  I wasn’t sure, but I wanted to find out.

I checked my coffee cup.  It was empty.  That was okay.  My heart was full.