Raising Saints instead of Bullies 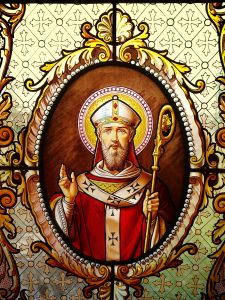 Bullying was the topic at our middle school youth night this past week.  If you follow the news or have a kid in middle school, you know that the bully factor is an important issue.  Middle school students are more likely than elementary or high school students to engage in bullying and to be bullied.  At this age, they are growing fast.  Their brains are developing the ability to think abstractly.  Their bodies are maturing.  They are trying to figure out who they are and how they fit into this constantly changing world.  All of these factors combine to create these tough middle years in their young lives.  And unfortunately, the bully factor makes these turbulent waters even tougher to navigate.

Low self-esteem is a big issue for these young people.  They are constantly comparing themselves to others and finding flaws with their appearance, social abilities, academic abilities, athletic abilities, etc…  They want to stand out from the crowd yet blend in at the same time.  They want to be someone who is admired, accepted and loved and many times they think that someone is someone different than who they really are.  These feelings of inadequacy lead to bully behavior.  When some young people have low self-esteem, they may pick on others to make themselves feel better.  When the victims are picked on, all their fears about their inadequacies are confirmed.  This obviously has a big impact on how they choose to interact with their peers and perhaps even become bullies themselves.  It is a nasty cycle that can leave lasting scars on these young people, especially in this age of texting, twitter and facebook.

As Catholic parents, teachers and youth leaders, it is imperative that we teach our children about the dignity of the human person.  And that starts by teaching them about how much God loves them- just the way they are.  These young people need affirmation.  They need to feel loved.  They need to know that they are fine in their own skin.  In fact, they are wonderful in their own skin.  While they see all their flaws, we need to point out all their strengths.  While they measure themselves against the world, we need to show them how lovely they look in God’s eyes.  And most importantly, we need to love them how God loves them.  When they find value in themselves, then they are able to see value in other people.  They are more likely to develop the ability to have empathy if they see themselves in a positive light.  Dignity of the human person cannot be taught from a text book.  This concept can only be grasped if they find dignity in themselves.  And that is where the adults in their lives need to work.  We need to be God’s instrument in their search for their own dignity.

I challenge parents to affirm your kids.  Every day, tell them you love them.  Every day, tell them how blessed you are to be their parents.  Tell them all the things you admire about them.  Tell them all the things that make them cool and awesome.  I admit that I can get too critical of my children.  I want so hard for them to succeed that I spend too much time telling them how they can do things differently.  Now, don’t get me wrong.  Criticism isn’t a bad thing.  But, if we don’t balance criticism with affirmation, then our kids conclude that they are failures.  It may be obvious to us that our kids are wonderful, talented and awesome, but it is not obvious to them.  They need to hear it.  So, tell them.  Make it a daily habit.  Help them find their own dignity and then they will see dignity in others.

I know a man who was bullied.  I know a man who was bullied by an entire community.  He was spit on, yelled at, beaten and humiliated.  His community hated him because he was different.  You see, this man loved God more than anything.  And he obeyed everything God told him to do.  He healed people. He taught about God’s love.  He provided food and nourishment to thousands.  He even washed their feet.  But that didn’t seem to matter.  The community hated him.  And even though he kept loving them, they continued to bully him.  One day, his community decided they had enough of him.  They put him on trial and declared him guilty of a crime he didn’t commit.  At this point, his few friends deserted him.  He was alone.  When they took him from the court room, the bullies stripped him of his clothes and whipped him.   They whipped him until he was almost dead.  But this wasn’t enough.  The bullies decided to make fun of him.  They put a purple robe on him and a crown of thorns.  The robe stuck to his open wounds and the thorns dug into his head.  They laughed at him and called him names.  The bullies pushed him around and spit on him.  But this wasn’t enough.  The bullies decided that this man needed to die.  They took him out in the streets and made him carry a heavy cross.  Some of the bullies were in the crowd.  They yelled at him, spit on him and kicked him when he fell down.  Some people in the crowd did nothing.  They watched him struggle and felt sorry for him, but they didn’t try to stop it.  Some people in the crowd cried and prayed.  They wiped his face when he struggled to move on.  One even helped him when the weight of the cross became too much for him to carry.  But no one stopped the bullies.  No one kept the bullies from yelling at him or spitting on him.  No one called for the torture to end.  The bullies marched him up a mountain where he collapsed in exhaustion.  They stripped off his robe and tore open all the wounds from his earlier brutal beating.  He felt like he was on fire.  They laid his bleeding body on the cross.  New waves of pain exploded in his body as the bullies hammered nails into his hands and feet.  They hoisted up the cross.  Then, they gambled for his clothes as he started the slow process of suffocation.  His mother and best friend stood by and watched him struggle for every breath.  They watched an innocent man bear the weight of a sin he did not commit- the sin of all mankind.  When the weight of that sin had taken its toll, Jesus looked up to heaven and gave up his life.

Jesus bore the weight of all that sin out of love for you and me.  He took the punishment that we were supposed to endure so that he may spend eternity with us.  He showed us what it means to love another totally and completely by giving us his very life as payment for our sin.  And what does he ask from us in return?  To love him back.  And to love others like He loves us.

If you have been bullied, then you are in good company.  Jesus understands your struggle.  He doesn’t want you to suffer like he suffered.  Ask him to give you the strength and courage to seek help from an adult.  Jesus desires you to have the freedom he won for you on the cross- not fear.

Moms: Are We Raising Future Saints?
Read
Raising Saints or Martyrs? Meditating on the Mother of Maccabees
Read
Your Family and Cyberspace: Raising Saints in the Digital Age
Read