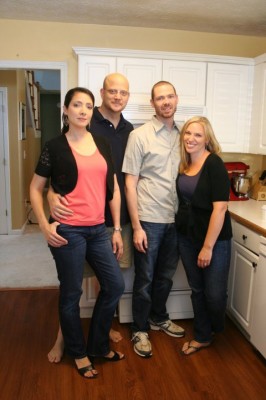 Yesterday, during my television appearance on CatholicTV's "This is The Day", I had the treat of offering a quick verbal "blurb" of endorsement for an amazing new television program being launched soon. "Mass Confusion" is the first ever Catholic sitcom and it will be debuting in an amazing way on Thursday, November 24th on television, but also all over the Internet or on your favorite mobile device.

Mass Confusion features Greg and Jennifer Willits and Mac and Katherine Barron (plus their slew of adorable kids) in a show that is family friendly, but also uproariously funny. Some of you may know Greg and Jennifer from their wonderful The Catholics Next Door show on Sirius XM's The Catholic Channel and the Barrons from the always hilarious Catholic in a Small Town podcast on SQPN.com. When these two couples come together for a plot that moves at a quick pace with great writing and a smart sense of what's funny, the result is magic.

I had the chance to watch the full pilot of Mass Confusion while attending SQPN's recent Catholic New Media Convention. Somehow, I found myself sitting (on the floor) next to Greg Willits as the pilot aired in front of a couple of hundred viewers. As I laughed myself silly, Greg was carefully gauging the response (and probably praying a Rosary at the same time). Greg shouldn't have worried at all: the crowd's reaction to Mass Confusion confirmed what I'd already suspected -- that this show will be a winner.

But here's the deal: we need your help. If we want Mass Confusion to become a full blown series, we need to get out the word in a big way. To demonstrate a desire -- and in fact a need -- for quality, funny and uplifting entertainment for our families, we will face an uphill battle. The good news is that if we work together, we can make this happen. I'm happy to share a super promo of Mass Confusion which will hopefully whet your appetite for more. Please share this online with your friends and family and make plans now to tune in on November 24th for the world premier of something that promises to change the face of television. You'll love it!