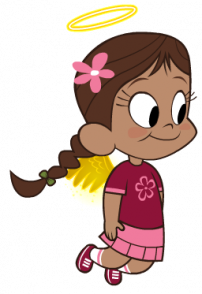 For me, Roma Downey and  Della Reese, were an answer to a prayer I hadn’t known I asked some 17 years ago.  Having grown up in a family that was “Christian” but didn’t “do church” (unless someone was getting married or being buried), it was a honest to God revelation to see that folks everywhere struggled with their faith and even angels sometimes needed a little direction and “saving.” I am, of course, speaking of the show Touched by an Angel.  A show that actually brought my family together around the television-a spot previously only held by “Monday Night Football” and the annual airings of The Ten Commandments and The Wizard of Oz.

Next month, Ms. Downey (a Roman Catholic!) again graces us with her “angelic” presence with the release of the DVD set, “Little Angels.” From their website (www.littleangels.com):

LITTLE ANGELS is an animated DVD series created exclusively for preschool-aged children to teach not only practical learning skills, like ABCs and 1,2,3s, but also to introduce them to the spiritual, moral and ethical principles of the Bible. Of course, we think it's terrific! (We might be biased...) But don't just take our word for it - for the first time in their organization's history, MOPS (Mothers of Preschoolers) has awarded a Seal-of-Approval to LITTLE ANGELS.

Also on the website, you will find a message from Roma and a sneak peak at their upcoming App for your iPhone or iPad!! In honor of the impending release of the DVD, we will be giving out two autographed copies of the DVD courtesy of Roma Downey and the folks over at 20th Century Fox Home Entertainment. Here’s all you have to do:  visit the Little Angels website and tell me here in the comments section at CatholicMom.com the name of the character I have used for this blog (and with whom I have a special affinity) AND the name of the Little Angel with whom YOU most identify or share an affinity. Entries must be posted by Saturday, November 5, 2011 at 11:59 p.m.

Good luck and blessings to you in your ministry!