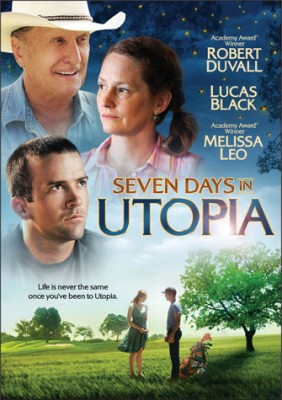 This week, I enjoyed watching the DVD version of Seven Days in Utopia. This was a film that I had really wanted to see in theaters, but that came and went before I saw it. In the end, I'm actually thrilled to have the DVD version since it includes some very special features.

Perhaps part of my love of Seven Days in Utopia is owing to the fact that I have many golfers in my family, beginning with my own father. I've witnessed first hand the love/hate relationship that many folks have with the game -- a perfect round is bliss, a bad one can haunt you for weeks. My own husband has been on a several year "fast" from golf because of the time commitment it takes. On the other hand, my parents live on the edge of a golf course and Daddy hits the links with my nephew almost every evening after work. I'm a marginal golfer at best, but I love being out on the course in nature with my family.

But Seven Days in Utopia is not just for golfers. Here's the blueprint of the story from the film's official website:

SEVEN DAYS IN UTOPIA follows the story of Luke Chisolm (Lucas Black), a talented young golfer set on making the pro tour. When his first big shot turns out to be a very public disaster, Luke escapes the pressures of the game and finds himself unexpectedly stranded in Utopia, Texas, home to eccentric rancher Johnny Crawford (Robert Duvall). But Johnny's more than meets the eye, and his profound ways of looking at life force Luke to question not only his past choices, but his direction for the future. Based on David L. Cook's best-selling book Golf's Sacred Journey: Seven Days at the Links of Utopia, SEVEN DAYS IN UTOPIA also stars Melissa Leo, Deborah Ann Woll, Brian Geraghty, Jerry Ferrera, Joseph Lyle Taylor, KJ Choi and Kathy Baker. The film is directed by Matthew Dean Russell from a script by Cook, Rob Levine, Russell and Sandra Thrift. The film was produced by Mark G. Mathis (Brick, Precious) and Jason M. Berman (The Dry Land).

While the big name in this film is of course Robert Duvall, for me the highlights in the cast were young stars Lucas Black as Luke Chisolm and Sarah Jayne Jenson as Maggie Swanson. Luke's time spent in Utopia learning not only from Duvall's character, but truly from the whole community, teaches him lessons that are relevant for anyone who seeks direction, focus and a dream in their lives.

Seven Days in Utopia is rated G and is truly a family friendly film that the whole family can enjoy together.

Order Seven Days in Utopia and support CatholicMom.com with your purchase