Rockapella Rocks the Holidays on CatholicTV 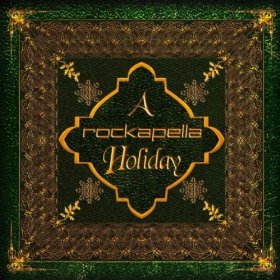 WATERTOWN, MA (December 13, 2011) Pop Vocal Group, Rockapella, To Be Featured on the Live Talk Show of the CatholicTV® Network.

On December 16, 2011, Rockapella, an American a cappella musical group, will be featured on the CatholicTV Network’s nationally broadcasted live talk show; This is the Day. The five-man vocal group will present their new CD, "A Rockapella Holiday," backed up by just their microphones, and perform some swinging songs of the season.

Rockapella’s name is derived from the words "rock" and "a cappella". They sing original vocal music and a cappella covers of pop and rock songs. The band originally found their biggest success in Japan, while in North America, they are best known for their participation in the PBS Kids game show, Where in the World Is Carmen Sandiego?, as the show's vocal house band and resident comedy troupe, as well as the singers of the show's theme song. The band has released 17 albums, both in North America and overseas and 3 compilation albums in Japan. 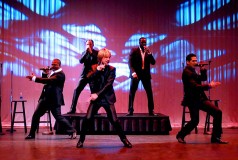 The little miracle that keeps the crowds coming back year after year and constantly draws new fans is Rockapella’s astonishing full-band sound. A sound that seems to be impossible coming from just five guys with microphones, no instruments, no tracks, no mirrors – and their hands never leave their wrists.

“We’re making every bit as much music as the whole ‘Glee’ chorus – but with only five guys,” says Rockapella’s human beat-box Jeff Thacher.

“We make it rock and make it interesting,” explains Scott Leonard, the group’s chief songwriter, arranger and architect of their evolving dynamic sound. USA Today summed up the lasting appeal, “The best musical instrument of all is the human voice – if you’ve seen Rockapella you know that’s the truth.”

The group has also stretched out occasionally of late into the instrumental world, accepting an invitation to perform with the Boston Pops Orchestra.

Visit: www.rockapella.com/index.cfm/pk/content/pid/24935 to see if they are performing in your area with the Boston Pops.

Be sure to visit www.Rockapella.com to learn more about the pop vocal group, and to purchase a copy of their latest CD, A Rockapella Holiday.

Live twice a week (Tuesdays and Fridays at 10:30 a.m.) Father Robert Reed and Jay Fadden host this half-hour talk show with Kevin Nelson, reporting on Catholic news. The hosts discuss various topics of the week in lively discussions for today’s Catholic, and respond to viewer mail (you may also email us at thisistheday@catholictv.org). The hosts also conduct interviews with people from around the world and around the corner.

This is the Day may be seen across the US on Sky Angel, and selected carriers. This is the Day may also be seen on demand in the US via Verizon FiOS.  CatholicTV has channels in New England on Charter, Comcast, Full Channel, RCN and other carriers. You can watch the CatholicTV Network 24 hours a day at www.CatholicTV.com or downloaded via iTunes.com and on your mobile device.