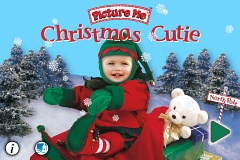 Just in time for the holidays, Oceanhouse Media, Inc. announces the release of Picture Me Christmas Cutie on Apple devices at the special introductory price of 99 cents. For the first time in an omBook (Oceanhouse Media digital book), parents can incorporate their child’s photo into the app making them the main character of the story. Oceanhouse Media has secured the rights to bring the Picture Me personalized book series to the app market as part of a new licensing agreement with Picture Me Press, LLC.

“Parents and children will enjoy this Christmas-themed omBook as they themselves become a part of the story,” said Michel Kripalani, President of Oceanhouse Media. “Picture Me Press is an exciting addition to our family of licensors. Their collection of personalized books is perfect for the digital medium.”

Easily take a picture or add photos from your library to the Picture Me Christmas Cutie omBook and your child can see themselves dressed up in various costumes including a helpful Santa’s elf, cute Christmas teddy bear, jolly snowman, cuddly mouse and playful reindeer. The omBook supports pre-literacy skills in the youngest of readers and encourages imaginative play as a child can take on a variety of characters.

Special features include randomization of photos so that the user’s images in the book are on different pages with each read through, high quality artwork based on studio photography, and word highlighting in sync with professional audio narration. In addition, young children will enjoy the playful sounds and interactive objects on every page.

“Children enjoy our books on a personal level, so seeing themselves turned into characters in interactive digital books naturally adds to the experience,” said Deborah B. D’Andrea, Creative Developer and Founder of Picture Me Press. “The Picture Me Christmas Cutie omBook is also a terrific keepsake that parents can have with them on the go to share with family and friends.”

Additional omBooks based on Picture Me Press books will be released in the coming months.

About Oceanhouse Media, Inc.
Creators of the award-winning Dr. Seuss book apps, Oceanhouse Media, Inc. is a leading publisher of more than 275 mobile apps for iOS (iPhone, iPad, iPod Touch), Android, NOOK Color, NOOK Tablet, Kindle Fire and HP TouchPad devices. The company was founded in early 2009 by Michel Kripalani, a veteran of the video gaming industry. Fourteen of the company’s apps have reached the number one spot within their categories on Apple’s App Store. In addition, Google has selected the company as one of its Top Developers, a designation granted to only 150 groups worldwide.

About Picture Me® Press, LLC
Picture Me Press, LLC,  located in Cleveland, Ohio has been writing, marketing, and distributing interactive children’s books and photo ancillary items since 1989. The company’s trademarked name, imprints and slogan, "Where Imaginations Play™", are synonymous with its mission to create high quality children’s books which encourage interactive reading and foster the imaginations of young children. For more information, visithttp://www.picturemepress.com/.