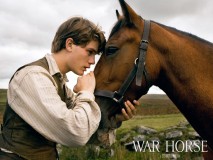 If you're looking for a simply fantastic movie experience to enjoy with the older children in your family this Christmas break, look no farther than War Horse, the new epic film by Steven Spielberg. I had the good fortune to view this new classic a few weeks ago at a sneak peek screening, and I have to say that it's among my favorite films for 2011. Here's the basic blueprint:

From director Steven Spielberg comes “War Horse,” an epic adventure for audiences of all ages. Set against a sweeping canvas of rural England and Europe during the First World War, “War Horse” begins with the remarkable friendship between a horse named Joey and a young man called Albert, who tames and trains him. When they are forcefully parted, the film follows the extraordinary journey of the horse as he moves through the war, changing and inspiring the lives of all those he meets — British cavalry, German soldiers, and a French farmer and his granddaughter — before the story reaches its emotional climax in the heart of No Man’s Land.

The First World War is experienced through the journey of this horse—an odyssey of joy and sorrow, passionate friendship and high adventure. “War Horse” is one of the great stories of friendship and war— a successful book, it was turned into a hugely successful international theatrical hit that is arriving on Broadway next year. It now comes to screen in an epic adaptation by one of the great directors in film history.

DreamWorks Pictures’ “War Horse,” director Steven Spielberg’s epic adventure for audiences of all ages, is a tale of loyalty, hope and tenacity set against a sweeping canvas of rural England and Europe during the First World War.

While this synopsis from the War Horse website calls the film an epic for "all ages", I must caution families with younger children that the film's war scenes definitely earn it the PG-13 rating. While never gratuitous, the battle scenes in the film are definitely intense and would likely frighten younger children. That being said, the values represented in this film are extraordinary and the ending will give your family some great fodder for conversation about things that really matter.

In terms of portrayals, it's hard to call a horse a "star" so I won't, but I will say that the animals in the film were stunning and I'd love to learn more about the training process used, since so much of what you see in this film is incredibly realistic and no animals were harmed in any way in the making of the movie. In terms of human characters, I'll simply say that I'm now a major fan of Jeremy Irvine, the young male lead who gave an amazingly heart-felt portrayal. Emily Watson, who plays mom Rosie Narracott, also turned in a winning performance -- while her character initially rubbed me the wrong way at the film's outset, by the end of the film I understood her transformation with a new appreciation for her sense of commitment and loyalty. Two additional major pluses for War Horse are the incredible scenery and an epic score that make this a film I'll definitely want to own on DVD some day.

The audience in my screening gave this one a well deserved ovation and I'm looking forward to viewing it again over Christmas vacation with my husband and sons.

Learn more about the film at the War Horse website.