This game is free, however it is only to be used for classroom and personal use. It may not be published on any websites or other electronic media, or distributed in newsletters, bulletins, or any other form or sold for profit.

Penitential Rite file folder game is based on Alquerque which originated in the Middle East as the game Quirkat. Alquerque boards are carved into the stone slabs which form the roof of the great temple at Kurna, Egypt. The Arabic author Abu al-Faraj al-Isfahani mentioned Quirkat in his 24 volume work Kitab al-Aghani ("Book of Songs") c. 950 AD. Alquergue migrated to Europe when the Moors invaded Spain. It was named Alquerque (the Spanish form of El-Quirkat) in the Alfonso X Manuscript which was written between 1251 - 1282 at the command of Alfonso X, King of Leon and Castile. This game is the ancestor of modern day checkers (Draughts in the UK) when it evolved to being played on a chess board instead of the standard Alqerque board. The Madagascan game Fanorama may have evolved from Quirkat. 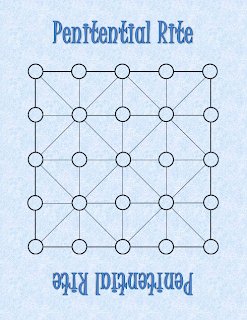 *This game is in accordance with the new Roman Missal that was implemented on November 27, 2011.

Visit The Catholic Toolbox for complete game details and instructions

Laura Grace was a special education teacher years ago and has taught CCD for 16 years. She has been a contributor at catholicmom.com since 2006, is part of the Gospel Reflections Team, and creates lesson plans for religious education and homeschooling. In 2008 Laura started her own blog, The Catholic Toolbox where she posts activities, crafts, games, worksheets, puzzles, lesson plans, classroom tips, etc. for all ages.