This game is free, however it is only to be used for classroom and personal use. It may not be published on any websites or other electronic media, or distributed in newsletters, bulletins, or any other form or sold for profit.

Gloria File Folder Game is a simple board game with the straightforward objective of racing the player's 4 pawns from start to finish with dice throws. Similar to the brand-name board "Sorry!" marketed by Parker Brothers, Gloria (Ludo) shares similarities with the game Pachisi (or Parcheesi), which in turn originated in 6th century India.

Gloria File Folder Game: Players race against other players in advancing his/her 4 playing pawns from start to finish by answering questions about Gloria and with successful die rolls. Each player has four specifically-designated finishing positions. The winner is the first player to successfully rest his 4 pawns on his designated finishing space. This game can be played individually or in teams. 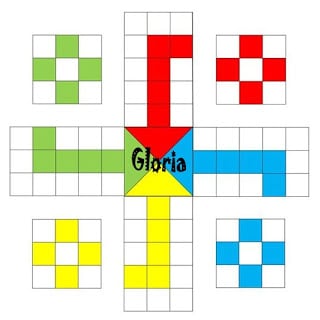 *This game is in accordance with the new Roman Missal that was implemented on November 27, 2011.

About the Game Board:

The game board is laid-out as a "Cross" (having 4 arms). Each arm contains 4 colored "resting spaces" -- also called Home Spaces, which are the destination spaces for a player. These home spaces are bordered by the spaces along which the pawns are intended to travel. At each corner of the board are the 4 colored Starting Zones, where each player's pawns sit at the start of the game awaiting entry into the game board proper. A successful die throw of 6 is required for a pawn to jump from the starting zone onto the starting square. Lastly, the single colored space between the Starting Zone and the Home Spaces is theStarting Space where each pawn starts its journey toward the Home Spaces.

Set Up: This game can be played individually or in teams. Each player gets 4 pawns of the same color. Players put all 4 of their pawns resting in the Starting Zones located at the 4 corners of the game board. Next, shuffle the deck and place it face down in a small basket near the game board. Put an empty basket nearby for the discards. Players choose who will go first and then game play goes clockwise. Players can roll the die and have the person with the highest number go first.

The playing pieces are meant to travel in a clockwise direction along the cross-shaped. Each playing piece is required to travel 1 full rotation around the game board before it can move into the player's Home Spaces. A die throw is used to determine the number of spaces by which pawns may advance.

At Start of Play: The game begins with each player's 4 pawns resting in the Starting Zones located at the 4 corners of the game board. Players take turns answering questions (the first person to their left reads the card). Players must answer a question correctly to roll the die. In order place your pawn on the Game Board a player needs to roll to exit the Starting Zone and enter the game board proper, a player needs to roll a 6. On a successful throw of 6, the player then places a pawn at the colored Starting Space.

The 4 colored Starting Zones are located in the same place. The single Starting Space is designated as the tail end of the colored Arrow pointing towards the center.

The player has choices: Provided the player rolls enough sixes, he can have all four pawns in play. Thereafter, he can choose to move any of his pawns on any valid die roll. Conditions for valid moves:

Capturing Pawns: Landing one's pawn on a space occupied by another player "Captures" the opponent's pawn. The captured pawn is then returned to its Starting Zone, where it must remain until a successful die throw of 6 makes it possible to be returned to the game board.

Forced Pass: A player is forced to pass his turn if his die roll results in no legal moves. If the only way to complete a move would result in a player capturing himself, the pawns remains in place and the player loses his or her turn.

Landing on the Home Spaces: A player needs an exact die roll in order to land on a vacant home space. Pawns that are already resting on home spaces can no longer be moved.

The game board is laid out as a "Cross" (having 4 arms). The Home Space is the exact center of the game board, which means all 4 pawns must reach the colored "Arrow tip" by means of an exact die roll.

*Throwing Multiple Dice: To make a game proceed faster, each player can roll 2-3 dice at the start of the game and keep throwing multiple dice each turn until he rolls a 6. He then uses the results of the multiple dice throw to move his piece. In subsequent turns, the player should only roll 1 die to move.

For example, if a player rolls "6-1-2", he can place 1 pawn on the Starting Space, then move it 1, then 2 places on the game board. Thereafter, he can only roll 1 die each turn, and must roll a 6 before he can place any other pawn at the Starting Space. On the other hand, if the player rolls "4-4-2", then all his pawns remain in the Starting Zone, forcing the player to pass his turn. On his subsequent turns, he can throw 3 dice until he gets a 6, thereby allowing him to place a pawn on the game board proper. Thereafter, he should throw only 1 die.

*Rolling Sixes: Under this rule, a player is allowed to roll again whenever he rolls a six. This way, a truly lucky player can have all four pawns advancing toward his Home Zone in record time.

Game Board- Print out Game Board, assemble, trim, and glue on the inside of a legal size file folder or on a piece of cardboard or poster board. Laminate or cover with clear contact paper to make it last.

Game Cards- (Use these cards or make your own.) Print Game Cards out on card stock. Cut out Game Cards. Laminate or cover with clear contact paper to make them last. Use only the cards that reflect your student’s abilities.

*Pawns can be coins, colored buttons, game pieces from other games, fish rocks for the bottom of aquariums, craft foam cut into shapes, etc. You can paint small objects such as rocks, small plastic tops or caps, etc. You can also buy pawns at game stores.

Laura Grace was a special education teacher years ago and has taught CCD for 16 years. She has been a contributor at catholicmom.com since 2006, is part of the Gospel Reflections Team, and creates lesson plans for religious education and homeschooling. In 2008 Laura started her own blog, The Catholic Toolbox where she posts activities, crafts, games, worksheets, puzzles, lesson plans, classroom tips, etc. for all ages.