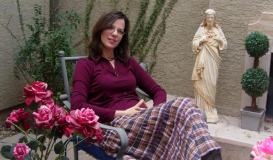 I’m not a theologian. I’m just a mom who has thoughts in the middle of the night. I can’t be the only mom who had the thought I had after reading a LifeSiteNews article about a recent finding that a baby in utero leaves healing cells in the mother’s body that can benefit the health of her liver, heart and brain for the rest of her life. Apparently, they’ve all been right about embryonic stem cells. They’ve just been wrong about the effective mode of delivering those cells: it requires an openness to life to really do the body good.

But the health benefits of pregnancy, although beautiful and fascinating to explore, were not the thoughts that kept me up in the middle of the night pondering the greatness of our God. The thought was this: “Wow! That means Jesus’ cells remained inside of Mary for the rest of her life! Jesus’ sacred body was hidden inside her immaculate one, not only for nine months. It remains so for all eternity.”

According to a recently-published book Do Chocolate Lovers Have Sweeter Babies?  by science writer Jena Pincott, during pregnancy, the baby’s cells enter the mother and the mother’s cells enter the baby’s. Could this help explain the beauty and validity of the doctrines about Mary held so dear by Catholics?

If this study is true, and if it applies to the miraculous birth of God incarnate, the cells of God were not just contained within the womb of Mary, destined to emerge entirely intact from her body on that first Christmas. They were distributed and embedded throughout her body for the rest of her life. Would that explain why God could not leave Mary’s body to decay within the earth? The Assumption of Mary teaches that Mary was taken up to Heaven, body and soul, immediately after her earthly life was complete. Could the fact that Mary’s body had the incarnate God still within in it at least partly account for God’s decision to move Mary’s body straight from its pure existence on Earth into the glory of Heaven?

Another Doctrine we Catholics hold dear about our Blessed Mother is that she was conceived without sin. The Immaculate Conception takes on a whole new relevance when we consider that Jesus’ cells were going to intermingle with hers for eternity and her cells were going to intermingle with His. God is all-holy. He cannot be intermingled with sin. If God is going to leave his very cells inside a human being forever, would it not need to be an all-holy place? An immaculate place?

The reverse is also true. With cells sneaking across the placenta in both directions, you can see why Mary would have had to be conceived without sin. Jesus could not have been born with a single sinful cell in His body. He is, after all, God.

There are moments in history when science and faith intersect in such a stirring way, insomniacs don’t stand a chance once they begin to ponder it all -- even it if is one o-clock in the morning and there is a  house full of kids who are going to wear you out the next day. If Mary could have known the science behind what was about to take place in her body on a cellular level, sleep might have eluded her as well.

Sherry Boas is author of the Lily Trilogy: Until Lily, Wherever Lily Goes and Life Entwined with Lily’s, A Mother’s Bouquet: Rosary Meditations for Moms and a soon-to-be-released novel, Wing Tip. Visit Sherry at www.LilyTrilogy.com.