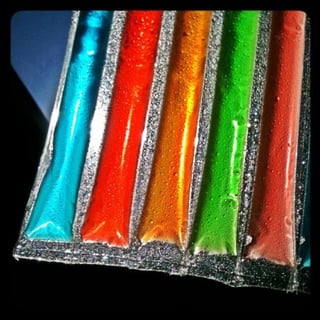 This is what we say in my home when we see God acting in our lives in little ways and big ways.  Last month, when my son discovered on Facebook through Father Frank’s status that Komen had stopped funding Planned Parenthood (before we knew how THAT ended), he automatically commented, “Christ loves us!”

These words have been a popular exclamation in my home time and time again. God is so deeply involved in our daily cares that I am sometimes surprised when people don’t have eyes to see  it or refuse to “bother” God with mundane prayers for things like parking spots or lost keys and therefore miss the opportunity to see His love. Somehow by grace, this little habit of noticing little favors and graces granted to us by God out loud by exclaiming "See, Jesus love me/you!" stuck with me and eventually stuck with my children. Yes, Jesus loves me!

What amazes me even more is when I see God working in my children’s lives DESPITE me. Let me explain:

One time my preschooler was attending her older siblings’ field day at school. She wanted to stay to the end because that’s when the school handed out ice pops to all the kids. Things were going well until my daughter said something disrespectful as a teacher walked by. The teacher was surprised by it. (This was all reported to me second hand by her older sister). I was embarrassed and decided that we would leave before the ice pops were distributed as a punishment. My daughter cried so despairingly as I picked her up and buckled her into the carseat that it surprised me. It wasn't until she had caught her breath enough to explain what happened that I realized it had been a huge misunderstanding. I had never even thought to question the occurrence but acted immediately. I felt terrible but not enough to turn around.  All this fuss for an ice pop? I don't know why but I was inspired to say to her, “Listen, don't cry. I'm sorry. Just pray and Jesus will provide you with an ice pop.”

I know I am a wicked and lazy mother. But God is not.  She took a nap and the pop was soon forgotten by us. But, of course, not by God. That evening I got a phone call from my mother who wanted to stop by for dinner. When she pulled up to the house she honked in her customary manner and we helped her get some things out of the trunk that she had purchased for the kids. The last thing she pulled out was an entire case of, you guessed it, ice pops!  Amazed, I quickly ran to get Susie to show her. She was thrilled and I kept saying “See?! Jesus loves you!” ( even when your own mother is rotten). I was as excited as she was that God loved her enough to bless her with her ice pops- a whole case of them. Moreover, I was personally touched at  how God was just and blessed her  DESPITE my injustice and despite ME. It brings tears to my eyes as I remember it.

These things have happened in my home time and time again so I was surprised one day to hear my husband echo my own words to me. That’s not to say he didn't embrace our family motto, but he had always been a a quiet observer and I never thought he gave the matter much thought.

We were at his Baptist church one morning picking seats near the front to see the children sing some Christmas songs for the parents. I was happy that we had found seats near the front until I realized  we were on the wrong side of the church and the kids would be filing out and singing from the steps at the opposite end of the church. That’s what they had done the previous year and that’s why the seats had been too easy to find. I grumbled something to my husband and we were both slightly disappointed.

The service started and soon the kids started filing out. To my surprise, they kept on walking right past the steps and marched over to our side of the church and stopped directly in front of us. They were so close I could see up their noses! (ok, not really) My husband smiled and turned to me and said, “See? Jesus loves you!”