When a Moose Crosses Your Path 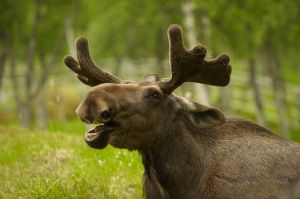 I was surfing quickly through Facebook awhile back (I’m not really a fan) to check on a friend’s son who had surgery.  The system works well for her to keep everyone up-to-date and is much less exhausting then repeating the information to everyone continuously.

In the meantime, I came across a note from my sister-in-law who lives in Wyoming. She was losing her internet service because of the huge snow storm she was getting.  She lives, literally, in the wilderness.  The only access to her house is by snowmobile in the winter. (Personally, I believe she lives on another planet, rather than in another state!)

Anyway, she was telling my husband that she and her husband were going home (by snowmobile) one night when a moose wandered onto their path.  The moose apparently decided that it was not in any hurry, so it spent the next hour sauntering down the road in front of them, leaving them cold and in slow-motion.  Eventually, when the land smoothed out, they were able to go around it and avoid getting dunked in the river.

While I cannot begin to imagine being held up by a moose--which, apparently is bigger, stronger, and uglier in person than one might think--I suppose there are times when we all need a moose in our path to slow us down.  If a moose stood in my way, for instance, and said, “Not so fast.  You need to stay put,” I’d listen. While moose tend to be big, dumb and hairy, they might actually be helpful at times!

The presence of the moose can serve as a reminder that we should walk the path we are supposed to walk, take our time, and enjoy the view.  We shouldn’t let others rush us. There will always be people behind us, trying to get us to move faster, or do more, but if we know what is good for us, we won’t listen to them.  We’ll set our own pace and be true to it.

I’m a big believer in balance.  Take January, for instance.  It was a busy month for me.  Even still, I made sure that it was dotted with great moments of peacefulness.  I carved out huge chunks of time for rest in front of the tabernacle and conversations with God.

When our lives get out of balance--as so many are today--it is unhealthy for us.  I suspect Jesus knew something of this because when you look at his active ministry, you can see that there was balance between people and prayer.  He would go off on his own, up the mountain to pray, and then there were times when he was present to the people.  Sometimes, the two intersected naturally, but we can see from his example that prayer and quietude are a solid path to balance.

So, if you are not lucky enough to have a moose cross your path today to remind you of balance, at least you have me.  While I may not be big, dumb and hairy, I’d be happy to saunter in front of you if that’s what it takes!

Spend some time resting in the Lord this week.  There really is nothing better.