I Am a Christian: A Summary of the Passion of Saints Perpetua and Felicity 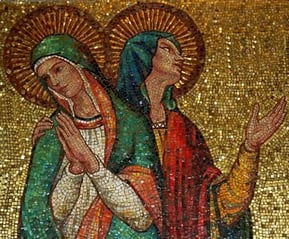 Today we celebrate the Feast of Saints Perpetua and Felicity, third century Carthaginian martyrs who resisted impossibly intense pressure to renounce their faith, choosing rather to be thrown to wild animals than turn their backs on their beloved Lord.  (For a full account of the events, visit New Advent.)

Perpetua and Felicity were part of a group of five catechumens apprehended in Carthage in 203 A.D. for the practice of the faith.  Perpetua was a well-educated twenty-two-year-old married mother with a nursing infant, and Felicity was her servant*, herself seven months pregnant.  Together they and their companions were imprisoned and roughly treated by the soldiers as they awaited their martyrdom.

The group was baptized in those early days of their arrest, but for Perpetua, the joy of the sacrament was clouded by anxiety over her family.  Perpetua did not have the support of her father, who visited her often and pleaded with her to denounce her faith for his sake and for her infant son.  Her mother and brothers were believers, but they, too, were suffering on her account.  Perpetua by this time was in great pain from not having nursed her baby for several days, and she was greatly distressed over her son’s lack of nourishment.  She endured these trials until it was arranged that the baby be allowed to stay with her in the prison, where they both quickly regained strength.  And there, Perpetua writes, “the dungeon became to me as it were a palace, so that I preferred being there to being elsewhere.”

During this time, Perpetua’s brother asked her to ask God in prayer if they would be released or if the imprisonment would result in death.  Perpetua was given a vision of a golden ladder laden with iron weapons leading to heaven with a dragon crouching at the bottom.  The two ascend successfully in the vision, and after Perpetua related this to her brother, they decided that it meant that this imprisonment would lead to their martyrdom and not their release.  Perpetua writes, “We understood that it was to be a passion, and we ceased henceforth to have any hope in this world.”

Perpetua’s father continued to be a source of stress, not understanding her devotion, and later came to her hearing, her son in his arms.  Perpetua writes:

Then they came to me, and my father immediately appeared with my boy, and withdrew me from the step, and said in a supplicating tone, 'Have pity on your babe.' And Hilarianus the procurator, who had just received the power of life and death in the place of the proconsul Minucius Timinianus, who was deceased, said, 'Spare the grey hairs of your father, spare the infancy of your boy, offer sacrifice for the well-being of the emperors.' And I replied, 'I will not do so.' Hilarianus said, 'Are you a Christian?' And I replied, 'I am a Christian.' And as my father stood there to cast me down from the faith, he was ordered by Hilarianus to be thrown down, and was beaten with rods. And my father's misfortune grieved me as if I myself had been beaten, I so grieved for his wretched old age.

Later in Perpetua’s account, as the day of their martyrdom was fast approaching, Perpetua notes that Felicity was growing anxious that she might not be allowed to die with her companions, as it was illegal to publically chastise pregnant women.  Though in her eighth month, Felicity and her companions prayed that she might deliver early so that she, too, could be martyred.  When they finished their prayer, Felicity went into labor.  A soldier’s servant taunted her, saying that the sorrows she presently felt would be nothing compared to the pain she would later endure from the animals.  Felicity replied, “Now it is I that suffer what I suffer; but then there will be another in me, who will suffer for me, because I also am about to suffer for Him.”  Felicity gave birth to a girl who was raised by a fellow Christian woman.

When the great day of their martyrdom came, the group emerged triumphant into the circus:

The day of their victory shone forth, and they proceeded from the prison into the amphitheatre, as if to an assembly, joyous and of brilliant countenances; if perchance shrinking, it was with joy, and not with fear. Perpetua followed with placid look, and with step and gait as a matron of Christ, beloved of God; casting down the luster of her eyes from the gaze of all. Moreover, Felicitas, rejoicing that she had safely brought forth, so that she might fight with the wild beasts; from the blood and from the midwife to the gladiator, to wash after childbirth with a second baptism.

The Lord arranged that each should die according to their desire.  Earlier, the group had been discussing their martyrdom, and one of their companions mentioned that he wanted to battle all of the beasts so that he might earn a more illustrious crown.  Indeed, he and his servant did just that.  One considered bears “an abomination” but imagined he would die from a single bite from the leopard.  This, too, is what transpired, as the other animals would not come close to him.

For Felicity and Perpetua who had been stripped and bound with nets “a very fierce cow” was let loose on them, adding insult to injury.  The account relates that the crowd “shuddered as they saw one young woman of delicate frame, and another with breasts still dropping from her recent childbirth” meet the beast so they sent them back to be better clad.  On their second time out, Perpetua was flung and landed in such a way that her middle was exposed.  She covered herself up, mindful even of modesty in the heat of the moment.  She was called back out and fixed her hair “for it was not becoming for a martyr to suffer with dishevelled hair, lest she should appear to be mourning in her glory.”

She and Felicity were ultimately mortally wounded by the cow, yet Perpetua was in such a state of ecstasy that she had felt nothing of it.  Their companion, too, had felt uninjured, though gouged.  In the midst of their bloody trial, the martyrs encouraged other catechumens who were looking on not to be troubled but rather confirmed in the faith.

When it was time for them to be slaughtered by the sword, the martyrs gave each other the kiss of peace and awaited their heavenly reward, with this special note about Perpetua.  “Perpetua, that she might taste some pain, being pierced between the ribs, cried out loudly, and she herself placed the wavering right hand of the youthful gladiator to her throat. Possibly such a woman could not have been slain unless she herself had willed it, because she was feared by the impure spirit.”

Dearest Perpetua and Felicity, we pray for your intercession, that we might face our daily trials with joyful courage, convinced of Jesus’s immense love for us, so that we might join you one day in Our Lord’s heavenly home.