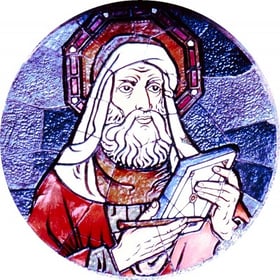 Editor's note: Today we begin a new Lenten series of reflections by Nancy Jo Sullivan and Jane Kise. With "We Can Only Imagine: Inspiration for Your Lenten Journey", we hope you will be inspired, moved and uplifted as you journey towards Holy Week and Easter. LMH

AND GOD SAID, “I will be with you. And this will be the sign to you that it is I who have sent you. When you have brought the people out of Egypt, you will worship God. Exodus 4:12

God chose Moses for a huge task, to go before Pharaoh to tell him: “Let my people go. Free the Israelites.” Who but Moses could God send? Yes, Moses was the son of Hebrew slaves, but he’d been raised by Pharaoh’s daughter. He knew the ways of palace life and the manners of the powerful.

But Moses had good reason to stay away from Egypt. He’d fled after killing a brutal slave master. Pharaoh had tried to put Moses to death for that. Now Moses had a new life in the desert as a shepherd, along with a wife and family. Egypt was nothing but a memory, long ago and far away…

Moses wiped the sweat from his brow and scanned the rocky terrain. The afternoon sun radiated from the bluffs and peaks that surrounded him. As a shepherd, Moses was searching for missing sheep. “Just one more to find…” he told himself as he turned his glance toward a craggy nook, shaded with large white stones.

Drawing near, a whiff of smoke caught him off guard. Who would have a fire around here? Moses thought. The smoky scent grew stronger. He crept around a large rock that was as tall as he was and stopped in his tracks. There, in front of the rock, a bush was burning.

“How strange” he said to himself. Moving closer, he watched the blaze. Every small twig of the bush was on fire yet none of the gangly branches were succumbing to the flame. Not even the leaves were being consumed.

“How can this be? ” Moses called out, his voice echoing against the rocks. Taking small, slow steps, he drew even closer.

“Moses! Moses!” Someone was calling him. Spinning around, the shepherd wondered if Jethro, his father-in-law, had followed him. Struggling to catch his breath, Moses felt a wave of fear rush over him. There was no one around. No one.

Softly, Moses answered the voice. “Here I am,” he said as he took another step.
Sparks flew from the fire, rising above him. Moses drew his cloak over his face. “Take off your sandals, for the place where you are standing is holy ground. I am the God of Abraham, of Isaac, of Jacob.

Now shoeless and trembling, Moses sank to his knees. From the burning flames, the mysterious voice continued. “I have heard my people crying. You must go back to Egypt. You must tell Pharaoh to free the Israelites.

Go back to Egypt? Me? No! Moses trembled as he imagined himself asking for an audience with Pharaoh. “Who am I to do this?” asked Moses.

The voice answered, “I will be with you.”

Moses shook his head in disbelief. God, the merciful, the mighty, was speaking to him. As an ordinary man, Moses knew he had no right to question the Almighty but he needed to know more. “But how do I tell them who you are?”

The voice thundered, I AM WHO I AM. Tell the Israelites that I AM have sent me to you.

Not daring to even raise his eyes towards the fire, Moses bowed lower to the ground, trembling. Why would anyone believe that God had spoken to him from a burning bush? In a panic, he asked, “What if they don’t believe me?”

What’s that in your hand?” The Lord asked.

Throw it on the ground. Moses obeyed and the staff quivered and coiled, then became a hissing serpent. Moses started to run but God called him back. “Take hold of the snake’s tail,” the Lord commanded. When Moses touched the serpent, it immediately changed back into his staff.

Rising to his feet, he held the staff close to his chest. Questions raced through his mind. Why had God chosen him for such a momentous mission? He was good at leading sheep, not people. Didn’t God know he was a quiet man that words didn’t come easily to him? “Lord,” Moses stammered. “I’m…I’m not a good speaker. Please send someone else. ”

Moses waited for God’s response. For several minutes he did nothing but stare at the wordless bush. “Please send someone else…” begged Moses.

The orange flames crackled with warmth. “Moses,” the voice began again, this time with the tone of a loving father. “Who made you? Who gave you sight and hearing? I will assist you in speaking and I will teach you what to say…”

At that the flames flared high into the sky. This time the Lord’s voice was tinged with firmness. “Then your brother Aaron will speak for you. I will assist both of you.

Now take your staff and go. And remember, the great I AM is with you.

In the Bible, the bigger the task God is asking someone to tackle, the longer the conversation lasts. Moses was allowed to ask a lot of questions before God ran out of patience. Note, though, that the conversation wasn’t exactly an argument. Moses was doing his best to listen to God, to comprehend the role he was to play in event of cosmic proportion.

Each question touched on a different area as his conversation with God continued. Why me? Who are you? What if they don’t believe me? How can I speak the right words?

God responds to each question with reassuring answers. Only when Moses stops listening and tries to convince God that he can’t speak, does God become impatient with him.

In my own prayer life, I’ve often had “burning bush moments.” After my first child was born with Downs’s syndrome, I came before God and fired a litany of questions at him: Why this child? Why our family? What does the future hold?

As I listened for his response, I didn’t get audible answers like Moses did. Instead, the presence of the Great “I AM” filled me with warmth and reassurance. The light of God’s love became my staff as I journeyed through the Egypt of mothering a handicapped child. “I will assist you….” God often said. (And he did!)

Lent is a great time to have a good conversation with God, to take off your shoes and pray through your questions. When you pray though, be sure to turn your ear to the great I AM. He always has the right answers.