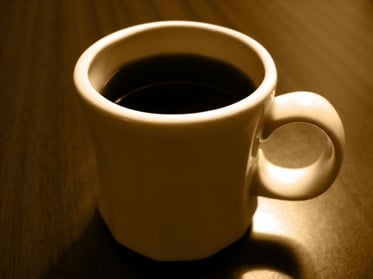 “Really, Lord? Don’t you think the children would be safer if I could have coffee?”

This conversation begins each morning around 9am, the time the last little darling arrives at my home for child care. By this time in the morning, I’ve usually changed eleventy million dirty diapers, read Dinosaur Roar at least 400 times and built, rebuilt and rebuilt the Island of Sodor because it’s just never quite right according to the 5-year-old train engineer. Yep, by this point in the morning, my get up and go has gotten up and went far, far away to a distant land flowing with coffee and chocolate, and where dinosaurs and trains never existed. By this time in the morning, my craving for coffee is profound.

For Christmas, my parents got us one of those new fancy coffee machines- the Keurig. It makes GREAT coffee at the touch of a button. It’s like magic. You turn it on, put your k-cup in, put your mug underneath and press the button. Then the most wonderful aroma fills the room as the hot, steamy, caffeinated liquid fills my cup of joy all the way to the brim. I LOVE it. I even find it a little sexy.

And now we come to my Lenten fast. Except for the year I gave up facebook for Lent, I usually give up three things: coffee, chocolate and alcohol. I give up not one, but three things because I am an over achiever. I have an A-type personality and my perfectionism is border line obsessive-compulsive. Besides, I am an adult and an adult should be able to give up silly things like chocolate and wine. Well, each year when I gave up these three things, I failed in an epic manner. By the end of the first week, you could find me in the fetal position on the bathroom floor surrounded by candy wrappers or desperately hiding in the laundry room at 7 in the morning with my elicit cup of joy, I mean coffee. “Maybe if my husband doesn’t catch me,” I rationalize, “then I haven’t really failed.” Ha! And it’s no wonder I fail, because let’s face it- this sleep deprived mama and wife with two jobs is attempting to give up three of the four major food groups.

So, this year, I decided not to set myself up for failure. This year, I decided to seek God’s will for my Lenten fast. Surely, he would have a better idea than me. I mean, he is God of the universe, omnipotent and all that fun stuff. Anyhow, I made this decision while sitting at the kitchen table, and as soon as the thought entered my head to let God tell me what to give up, my eyes fell on the Keurig. It was as if a ray of sunshine fell on it, giving the heavenly machine a divine glow while angels sang their hallelujah chorus marking the significant moment with awe and wonder. My heart sank. “Really? Really, God? Are you sure? Because, I thought that when I prayed to figure out what your will was, I thought for sure you understood I was ABANDONING my ideas, I mean, my will, and therefore I could have coffee, chocolate and alcohol during this Lenten season! I thought that was the plan!” And then I heard the voice in my heart say, “but I am only asking for one- not all three. Let’s focus on just one sacrifice.”

I felt like such a child. In the back of my head, I thought that maybe God would give me a grown up task. I read all these Lenten articles about what adults should do for lent in order to grow closer to God. My ideas of giving up something like chocolate seemed childish. And yet, I fail at it- EVERY YEAR! So, here God was bringing me back to square one. Here is he was showing me exactly what was best for me- 40 days with no coffee. I wonder if he is absolutely sure that is what’s best for everyone around me.

It’s been 17 days since I’ve had coffee. Now, I take that back. I did have coffee at a friend’s house last Saturday night, but my friend’s Dad, who happens to be a famous Catholic theologian, explained to me that since it was after sun down on Saturday, we weren’t technically in Lent and that I could have coffee. Since he’s a famous Catholic theologian and I was at his house, I decided to go with it. Anyhow, it’s been 17 mornings since I’ve had coffee. And for someone who’s often up late working and then up early with kids, this is a true test of my will power and endurance. Exhaustion has a whole new meaning. In these 17 days, I’ve learned about myself and the benefits of fasting.

The first lesson I’ve learned about is desire. When we fast in this nature, we physically withhold something our bodies need and that creates a physical desire. That physical desire mirrors the spiritual desire our souls have for God. In this secular world, we can easily choose to ignore those spiritual longings- but physical longings are harder to ignore and they can remind us of how much our souls long for God. My experience with this physical longing was most clearly played out on Ash Wednesday. Not only did I give up coffee cold turkey, but the only thing I had to eat all day was bread. I was determined not to eat a real meal until after I received Jesus in the Eucharist. By the time 7:00 pm rolled around, I had a headache the size of Texas and I was beyond hunger. When the Priest held up the host for consecration, my mouth was watering. That was when I realized that this is what my soul experiences at every Mass. My physical hunger was but a shadow of my spiritual hunger. When I received Jesus in this physical state, it felt as if every cell in my body was nourished. God used my body to show me what my soul experiences when I receive Jesus in the Eucharist. Now, that was awesome.

The second lesson is all about waiting. When we fast during Lent, we are waiting for the day when we can end the fast. That is right, I have about 30 more days until I can fire up the Keurig! Now, I realize that I could fire it up on Sundays, but remember, I’m an over achiever. Combine that with the perfectionism and catholic guilt, and you have woman who cannot touch the Keurig until Easter morning. So, I’m learning about waiting. And I don’t know about you, but I HATE waiting. I don’t like waiting in lines, sitting in traffic or even being on hold on the telephone. When I’m waiting, I am thinking about all the other things I could be doing with my time and it drives me bananas. But when we are waiting, we are forced to be still and it’s in those still moments that God can seek us out. In my professional life, I am in a place that requires me to wait. I am not sure where I am supposed to go next but there is nothing I can do but wait it out. I have been frustrated by this IMMENCELY. I want to know what the future holds, but I can’t. I must wait. This fast has taught me that in order to get through the waiting, I must be still and listen for God. I must seek Him instead of formulating all the possible scenarios of my professional future. I must anticipate God’s presence in my life as much as I anticipate that steamy cup of caffeinated perfection on Easter morning.

Finally, this particular Lenten fast has taught me that it is important to take one thing at a time. Instead of tackling the Lenten fast with multiple sacrifices that lead to fasting failure, God wants me to pick one thing and be successful. This is enlightening because I am the queen of multitasking. Now, don’t get me wrong, multitasking is essential to motherhood. If I didn’t have this gift, my children would be running around with dirty underwear and only one good meal in their tummies. But there are some things in life that deserve our full, undivided attention. This year, my attention has been divided. I have had a lot of irons in the fire. I am realizing that some of these irons need more of my attention and the only way to make that happen is to take some of the irons out of the fire. I can’t do it all. I can’t work 12-15 hours a day and still be the mother and wife this family needs. There doesn’t seem to be enough of me to stretch between the two jobs I love. At this moment, I know I am right where God wants me. However, I think He is preparing me for some tough choices in the future. I must admit that giving my full and undivided attention to giving up coffee has felt a little good. It is nice to only have one sacrifice to juggle instead of three.

So, what is the best way to go about fasting? One day at a time. Every morning I look at the Keurig and let the devil on my shoulder tell me how stupid this fast is. I let him call me childish. I let him try to convince me that giving up coffee is more trouble than it’s worth. But my heart knows it is worth the trouble. Although I thought I needed a 12 step program in the first week, I have been able to stick to it. And after just 17 days, I have gained more understanding about fasting and myself than I ever thought I would. The coffee will return at Easter. On that day I will raise my beautiful cup of caffeinated perfection in celebration to the God who gave up more than coffee for me. Maybe as this fast continues to progress, I can gain a little more understanding of that love- a love that drove the God of the universe to die a terrible death to gain the soul of this sinner.