The Church wasn’t meant to be the “cool mom” 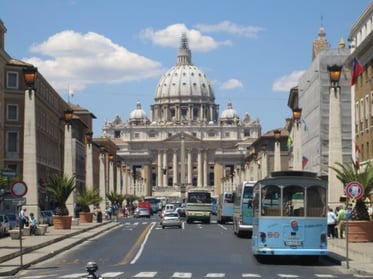 When I was asked to share my perspective on the HHS mandate, I thought there must be a mistake. Surely folks would rather hear from a good Catholic. A perfectly NFP-practicing, saved herself for marriage—five, six, seven-kid-having Catholic woman.

That hasn’t exactly been my path. Not to mention, what could I possibly add to the conversation that hasn’t already been said?

Media outlets and social networks are saturated with news and opinions about the mandate that requires religious institutions to pay for health insurance that covers contraception, sterilization and abortion-inducing drugs. Comments along the lines of: “It’s like stepping back into the ‘50s” or “Wasn’t the whole contraception debate settled around the time of JFK?” appear regularly out of one camp, making it clear that some people (OK, many people) think the Catholic Church’s stance on birth control is old-fashioned and anti-woman.

In the past I may have jumped on that bandwagon and even added my own comment along those lines. But now I better understand what’s missing from that line of thinking: for Holy Mother Catholic Church, and those who love and trust her teaching, the morality of artificial contraception was never up for debate.

Long ago she made a decision and like any good parent, she stuck with it. She stays true to who she is, as she loves and guides her children through contrary decisions that can lead them down the wrong path; a path that leads to sin.

We do it all the time as mothers. It’s not my role to my kids’ BFF—or to be a so-called “cool mom”—it’s my job to be a parent that stands firm when it comes to forming their consciences and trying to teach them right from wrong. Mothers don’t win popularity contests that way, but it’s who we’re designed to be.

When I was about 5 years old, I got busted by my mom for stealing Starlight Mints from a bin at Nu-Way Grocery Store. When she figured it out, she didn’t say: “Oh, that’s fine. Everyone’s stealing mints. Next time steal something bigger.”

She marched me right back into the store, and guided me through the painful, yet valuable, experience of returning the mints and apologizing to the manager. She may not have won Most Popular Mom that particular day, but she does now [and I’m not a kleptomaniac].

As a mother she stayed true to who she is, and what she was called to do.

When it comes to contraception, sterilization and abortion-inducing drugs, Holy Mother Church can’t say: “Oh, that’s alright. So many other people are doing it, just go ahead. Hey, I’ll even foot the bill.”

While she respects our freewill, she won’t aid us in a choice that leads us to sin; in a choice that violates her conscience, as she works to form ours. She’ll stay true to who she is as a mother, and the government can’t force her to cease to be who she’s designed to be.

A well-formed conscience isn’t guided by societal pressure, secular media, political messages, the blogosphere, talk radio or government coercion; it's formed by natural law aimed toward the common good—by God’s law, which we believe is aimed for our eternal good.

And as I measure my holiness only in terms of progress, not perfection, I’ll continue to look to Holy Mother Church to be the still, small voice of my soul that tells me right from wrong.

Good Thing Baby Jesus Wasn't Claustrophobic
Read
Am I Evangelized? Mary Wasn’t Sure, So This Happened…
Read
Give Me Jesus
Read