A Wedding Story: Do Whatever He Tells You 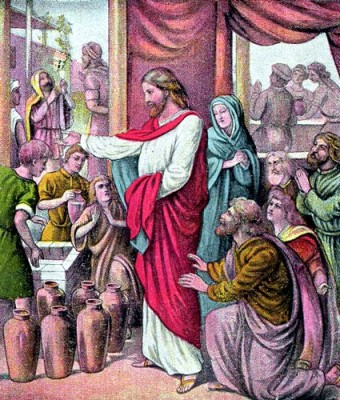 Editor’s note: Today we continue our Lenten series of reflections by Nancy Jo Sullivan and Jane Kise. With “We Can Only Imagine: Inspiration for Your Lenten Journey”, we hope you will be inspired, moved and uplifted as you journey towards Holy Week and Easter. LMH

Weddings.  months of planning, worrying, counting pennies,  and checking details.  Even two thousand years ago, weddings called for careful preparation.  However,  the ceremony only marked the beginning of festivities that lasted as long as seven days.  For working class families in Galilee,  weddings were a well-deserved break from constant labor, but a strain on the bridegroom's family.  After all,  hospitality was viewed as a sacred duty.  To not provide for your  guests brought disgrace.

John's gospel tells us that Jesus attended a wedding just days after he began his public ministry and called the first of his disciples.  The bride or groom may have been a close friend or relative, for Jesus' mother also attended the wedding.

Perhaps this was the first time Mary was with Jesus after he began his public ministry.  Yes,  Jesus was her son, but what could she ask of him now?

The little home in Galilee shook with the joy of the wedding feast at the guests sang, danced, and offered toasts to the bride and groom.  Even the servants hummed merrily as they replaced empty food platters with plates stacked with honey cakes, meats and olives.

Jesus sat with some of his newly chosen disciples at a long table covered with a linen cloth.  Mary,  his mother,  stood nearby.  She and her friends chatted as they arranged another tray of grapes into a rainbows of red, purple and green.   "Mother,"  Jesus called out. "Come and meet some of my friends."

"I'll be there in a minute,"  Mary answered.  She was looking forward to spending a few moments with her son.   Lately,  he'd been gone more than he he'd been home.  "My Jesus has so many new companions,"  Mary thought to herself.

While the musicians played familiar wedding dances on the flute and lyre,  memories from that life-changing day so many years ago flooded through her mind.  She'd been drawing water from the well as the sun rose over her home town of Nazareth.  Suddenly a bright light tumbled down all around her.  The light soon took form,  becoming a man dressed in white, an angel.  Frightened, Mary buried her head in her hands.

"Do not be afraid."  the angel told her.  Mary listened intently as the angel explained that she would soon give birth to a son. "You shall  name him Jesus.  He will be very great and will be called the Son of the Most High."

Mary sighed.  She remembered Jesus as a boy,  the way he and Joseph used to work together in the  carpenter shop,  the errands he would run for her  and the small, everyday moments they had shared as a family.   Now, she gazed in wonder as her grown son talked to acquaintences she'd never seen before.    "So much has changed..."  she told herself.

Suddenly,  one of the female guests tapped Mary on the shoulder and whispered:  "It's gone!"

"The wine..."  she replied as she pointed to a small room where servants were trying desperately to squeeze drops of wine from empty wineskins.

Mary saw a relative of the bride approach the servants.  She could see embarrassment on his face. How humiliating.

Mary made her way through the crowd toward Jesus.  But just before she reached his table, she paused.  "My Jesus is the Son of the Most High...He will know what to do..."

Jesus caught her eye as she approached.  "My son," Mary said softly,  "They've run out of wine."

Jesus looked toward the servants who were counting all the empty wineskins.   "My time has not yet come,"  he told his mother.   His voice was firm.

Mary nodded.  After all,  he had always belonged to God,  not her.  She put her hand on his shoulder and told the servants: "Do whatever he tells you!"

Jesus responded to Mary's request for help with a miracle  After telling the servants to fill several jars of water,  Jesus instructed the servants to "dip some out and take it to the masters of ceremonies" (John 2:8)     In the end,  the master of the banquet declared that it was the finest vintage of the feast.

Mary shows us that when we place our complete trust in her son,  we too can become candidates for a miracle.

As Holy Week approaches,  come to Jesus as Mary did.   Give him your smallest problem or your greatest need.   Then, do whatever he tells you to do.   Maybe you'll witness a miracle.