Love Story, Drama, Humor at the Heart of Inspiring Film;

Expands to More Than 200 New Screens Across the Nation 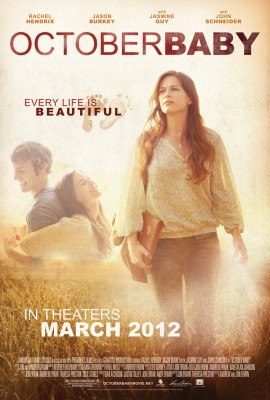 NASHVILLE – April 11, 2012 – While pundits call OCTOBER BABY controversial, the surprise hit with a dramatic, humorous love story at its heart continues to win over audiences nationwide. Entering its fourth weekend in theaters after debuting as the No. 8 movie in the country, OCTOBER BABY expands to 223 new screens.

“We’re thrilled by the audience response to OCTOBER BABY,” said Jon Erwin, who co-directed the film with his brother, Andy. “It tackles a serious subject but does so with humor, drama and romance.”

Starring John Schneider (Smallville, Dukes of Hazzard), Jasmine Guy (A Different World), and newcomers Rachel Hendrix and Jason Burkey, OCTOBER BABY tells the story of 19-year-old Hannah, who discovers she’s adopted and the survivor of an attempted abortion. With friends from college, she hits the road to find answers and to locate her birth mother. For the pivotal role of Hannah, Hendrix earned the Special Achievement Award for Acting at the Red Rock Film Festival.

The film spurred debate in national media, with its “Every Life Is Beautiful” theme; but the Erwin Brothers intended no political statement, preferring to start conversations on the subject by first telling a good story. Viewer reaction posted on Rotten Tomatoes indicates they accomplished their mission.

Initially opening in a modest 390 theaters, grassroots support has fueled the film’s expansion. For opening weekend, groups in 70 communities where OCTOBER BABY wasn’t scheduled pre-purchased enough tickets to ensure local showings. And groups can still form to bring the movie to their towns. (See OctoberBabyMovie.net for details and for a complete list of theater locations.)

Building on an award-winning career in music videos, OCTOBER BABY marks the Erwins’ feature film debut. It is a production of The Erwin Brothers and American Family Studios.